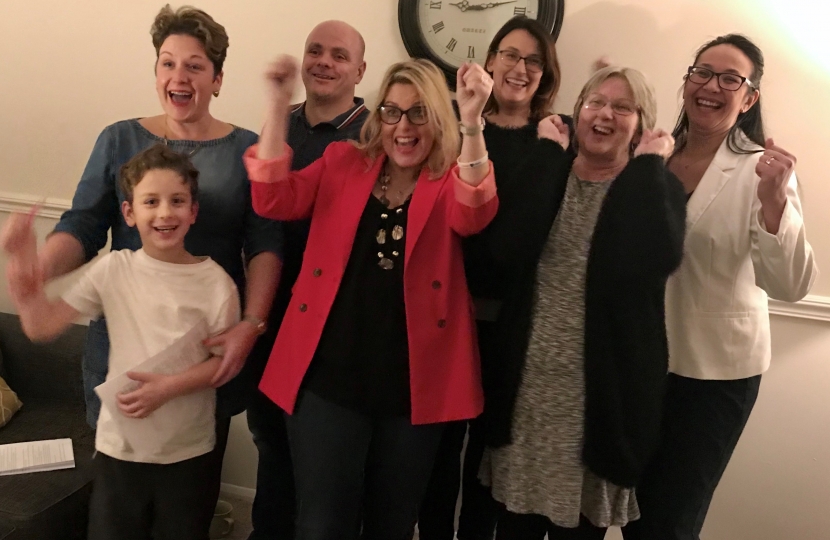 Mims Davies, MP for Mid Sussex, is delighted following the West Sussex County Council’s meeting today, 14th February, the crucial budget of up to £20 million has been approved and confirmed for the rebuild of the Woodlands Meed School college site in Burgess Hill, with a target opening of Autumn 2023.

“I’m so pleased for all the students, parents, Leadership, Governors and campaigners that Woodlands Meed will be completed as we all wanted. Today the Cabinet Member for Education at West Sussex County Council, Councillor Nigel Jupp, has confirmed  they will work with all haste to deliver the rebuild at this college site targeted at 2023 working alongside all local stakeholders. I know many people have campaigned hard for this and I pay tribute to and thank everybody who has come together to get this vital project moving. During the General Election campaign,  I promised my support to the Leadership, the Governors, campaigners,  Councillors and vitally parents and carers to work to  push for the delivery of a workable solution for students. I was determined to see this day happen.  I’m thrilled that the County Council have rightly signed this budget off today.

“I welcome the news that West Sussex County Council has recognised the importance that making this positive difference to the lives of our young people will bring with this announcement and I look forward to continuing to work closely with all of those involved to ensure the school is delivered.”

WSCC meanwhile have provided the following up statement following the Council meeting:

We can confirm up to £20m has now been allocated in the Capital Programme for the rebuilding of Woodlands Meed College subject to a suitable business case. This business case will look at how we make the best  use of the money available to meet the needs of pupils at the school. The anticipated completion date of the project is 2023 assuming all third party approvals are agreed. We look forward to working closely with the governors to realise this project.

Photograph: Mims Davies MP meeting with representatives of the campaign group Complete Woodlands Meed earlier this year – this photo was taken in anticipation of the go ahead for the budget for the rebuild.

As the MP for Mid Sussex, Mims Davies has taken the opportunity to meet with school Governors, local councillors and liaised extensively with parents regarding the history and current situation at Woodlands Meed College in Burgess Hill.  On Friday 10th January she met again with the Chair of Governors, Marion Wilcock and the leadership team plus WSCC Councillor Sujan Wickremaratch regarding this situation.

Mims said: “There has been a change in the leadership and cabinet at West Sussex County Council and I met with Cllr Paul Marshall, as Leader of WSCC, during the Parliamentary recess to raise the profile of the issues around the school and highlight the continuing uncertain future it faces on behalf of all those concerned.  I have previously spoken to Cllr Jupp as the cabinet member responsible for Education & Skills who explained that after the leadership change due processes were being undertaken to find out the current situation from officers at the council and reflect the local area committee feedback, the scrutiny committee feedback and learn from how this issue was continuing to escalate.”

She continued: “I am pleased to advise that the council has confirmed that following this due process, it will be, as expected, holding a further key update meeting in late January to provide its latest outcome around this important project and vitally give clarity to all concerned.  I had a thoughtful and constructive meeting with Cllr Marshall on this issue, along with many others topics West Sussex constituents would be interested in being raised, and am extremely hopeful that a positive direction will be found soon.  As Woodlands Meed is within my constituency I am leading on this matter and will continue to work with other local MPs to ensure a strong combined voice on behalf of all of our parents, campaigners and of course the school itself. ”

Mims and all other West Sussex MPs have another wide ranging meeting at Horsham County Hall in mid-January where this and other key matters will form the agenda.  Please be assured that the WSCC new leadership and Mims, as the new MP for Mid Sussex, take this issue at Woodlands Meed, including resolving it swiftly to the best satisfaction of all, very seriously.

15th January 2020 Update: Following the issue of the Public Document Pack for the Performance and Finance Scrutiny Committee to be held on the 22nd January concern has been raised by local campaigners that this suggests that any budget that may be agreed following due process will be split across 4 years resulting in a much delayed project delivery date.  This has been raised with WSCC.

In addition to email correspondence with parents and campaigners.

Met with Chair of Governors, BBC Sussex and other Parliamentary Candidates – 25th November 2019

Meeting with other local MPs and WSCC - 17th January 2020