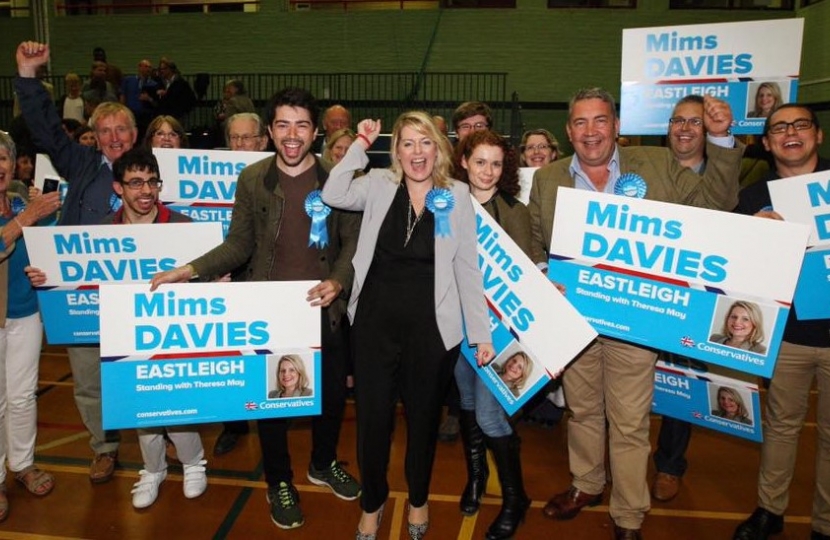 The Conservatives in Government have been working hard to make living and working in Eastleigh better.

Here are some items of real Conservative-led progress in the last 5 years:

We have been reducing the deficit and safeguarding the economy across the South East showing our long-term plan is securing a stronger, healthier economy for the people of Eastleigh.

We have cut Income Tax and put freezes on fuel duty so taxpayers can be more financially secure. This has resulted in the people of Eastleigh seeing their taxes cut since 2010.

We have created more jobs by lowering taxes and backing small business and enterprise.

We have introduced measures in capping welfare and reducing immigration and are now seeing the economy delivering financial benefits for people who want to work hard.

More people have seen their mortgage repayments reduced because of the low mortgage rates. The people in the South East have seen some 58,350 more businesses created than in 2010. This is a clear sign that our long-term plan to secure a healthier and stronger economy is working.

We have capped the dependence on welfare with 943 fewer people in Eastleigh having a reliance on receiving benefits who want to work hard and contribute to the economy.

More people have seen a reduction in their Income Tax and have seen fuel duty frozen with an estimated 43,957 people seeing their taxes cut since 2010.

We are creating more jobs by supporting small business and enterprise with lower taxes and better infrastructure. There are now 254,000 more people benefiting in the South East from the security and stability of being in work than in 2010.

We are investing more money into schools, providing new school places and skills for young people so that the next generation will be a workforce with the valued skills to succeed in the global market. So far £77.4 million is being invested in Eastleigh and across Hampshire for new school places so that every young person in the county receives the skills they will need in the future.