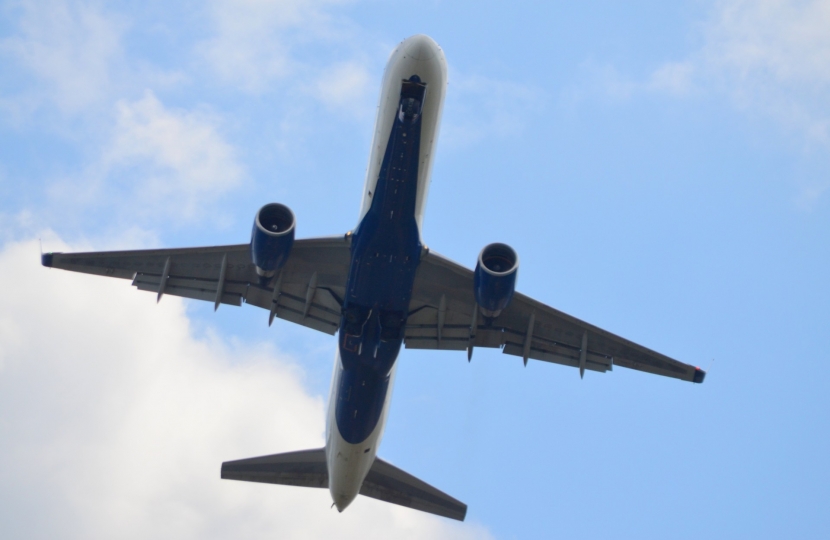 The Air Traffic Management and Unmanned Aircraft Bill is a vital, proposed legislation currently progressing through the House of Commons, where it had its Second Reading yesterday (Tuesday 2nd February). As a constituency which neighbours Gatwick Airport, one of the busiest airports in the world, this Bill will have a real, positive impact on the airspace above Mid Sussex and in the surrounding countryside, which I hope will come as welcome news to constituents.

After this pandemic, the Government and the Department for Transport expect our aviation and travel industries will recover swiftly, a view supported by industry experts. When it does, it’s crucial we update parts of our air traffic legislation which have, in some cases, remained in place for decades without being updated, despite the astronomical increase in commercial flights over the last half a century.

UK airspace is the gateway between Europe and North America - the world’s busiest intercontinental air corridor. It's our responsibility to ensure efficient operation, which is crucial for managing international air traffic across the Atlantic. Increasing demand on the aviation industry in the 21st century has resulted in more traffic being squeezed into the same congested areas of airspace. This results in:

Without change, the situation could deteriorate further in the coming years. The aviation industry is also expected to incorporate new types of airspace users, such as unmanned aircraft (like drones) and commercial spaceflight. We have already seen the issues these unmanned aircraft can pose, when drones were deliberately flown over Gatwick airport in December 2018, affecting 140,000 passengers and 1,000 flights. Many of those affected were from Mid Sussex and our neighbouring constituencies, who I know will be particularly pleased to see legislation introduced on drones and other unmanned aircraft.

It is therefore my hope that this Bill, by modernising the use of airspace, will allow us to generate lower CO2 emissions from aviation, reduce noise for those near flight-paths and improve punctuality for passengers, whilst also tackling the misuse of unmanned aircraft such as drones.

Furthermore, this Bill will:

For further detail about this Bill, I would recommend visiting: https://www.gov.uk/government/news/new-laws-to-combat-illegal-use-of-unmanned-aircraft-and-modernise-airspace

During the Second Reading on this proposed legislation in the House of Commons yesterday, my colleague, the Minister for Transport, Robert Courts MP, said:

“Airspace modernisation is a critical infrastructure programme of national importance. The benefits of redesigning these motorways in the sky are significant for all those who use and are affected by airspace. The UK’s airspace is some of the most complex in the world, yet there has been little change to its overall structure since the 1950s. Upgrading it is essential to open up airspace for all users, including general aviation flyers and new types of aircraft such as drones or, as they are properly called, unmanned aircraft.

“The Bill will limit the aircraft noise experienced by local communities and reduce traffic delays when demand returns. Without change, predictions show that by 2030 a third of flights could be unnecessarily delayed by an average of 30 minutes, which is 72 times higher than in 2015. Critically, the emissions savings that modernisation will deliver are a key component of the UK’s commitment to reach net zero by 2050.”