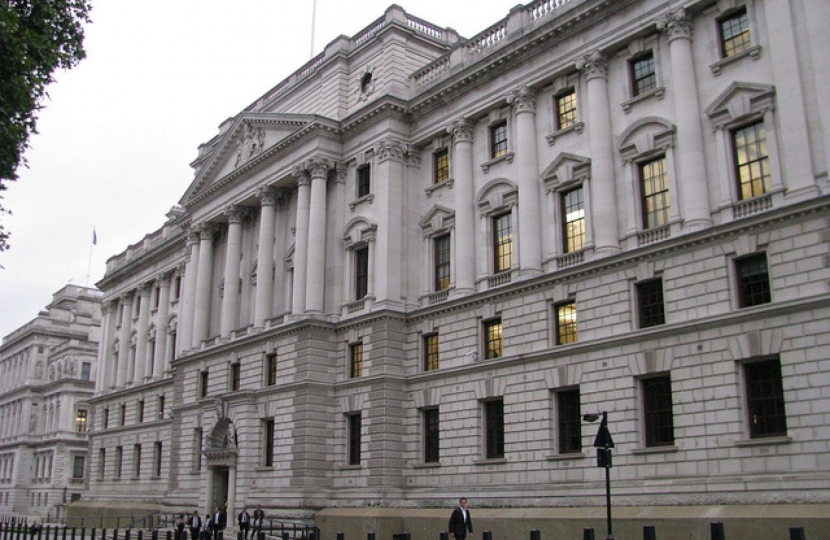 Listening to the Spring Budget this week, I was hugely encouraged by the Chancellor of the Exchequer, Rishi Sunak MP, who laid out the blueprint for how we begin to fix our challenging public finances which, due to the impact of the COVID-19 pandemic, has resulted in our economy shrinking by 10%—the largest fall in over 300 years. But it’s been our financial prudence in the last 10 years which has meant we can weather the storm of the last year and will hold us in good stead for the difficult decisions ahead. There is hope on the horizon with the vaccine roll out - construction is back to last February levels and around 600 thousand vacancies are out there, according to the ONS.

I would like to cite two areas of growth in two sectors which I know many of my constituents work in, which is deeply encouraging, namely: services and health.  These sectors acted as key contributions to growth in December, the former increasing by 1.7%, as a number of consumer-facing industries reopened following the easing of restrictions in December. The strong growth in health sector can be put down to the coronavirus testing and tracing schemes, and the Government will continue to invest in our vaccination and testing programmes in the weeks and months ahead, in the form of an extra £1.65 billion cash injection to ensure the Covid-19 vaccination roll-out in England continue to be a success. This also includes £33 million for vaccine testing and development against future variants and £22 million for study into combining vaccines.

In 2020, the Government spent over £280 billion in order to protect businesses, jobs and livelihoods across the UK. In addition to unprecedented measures like the Coronavirus Job Retention Scheme, much of this financial support has been provided to public services like the NHS, local governments, public transport and the welfare system. Over the course of the financial years 2020/21 and 2021/22, the Government's total fiscal response to Covid-19 will amount to £407 billion.

The public health crisis brought on by COVID-19 has created a significant economic contraction, with The Office for National Statistics confirming UK GDP shrank by 9.9% in 2020. In percentage terms, this represents the largest annual fall since the Great Frost of 1709, and has had serious implications for tax receipts.

Despite the incredibly difficult time for public finances, I have been encouraged by real gross domestic product (GDP) increasing by 1.2% in December 2020, following a revised 2.3% decline in November, when there were more extensive restrictions to activity.

As the IMF, Bank of England and OBR have all confirmed - our plan is working. As a result of our interventions, unemployment is now estimated to peak at far lower levels than previously expected, and our economy is now forecast to recover faster than previously thought.

Ultimately, I believe it is the Government’s responsibility to ensure Britain has a strong economy backed by sustainable public finances, so the country will continue to have the space to fund vital public services and prepare for future economic shocks.

Through these interventions and decisions on restoring public finances, I remain confident this country will bounce back stronger from the seismic shock of COVID-19.

The Office for Budget Responsibility (OBR)

On March 3rd, after the Chancellor finished his Budget speech, the Office for Budget Responsibility published its forecasts for the economy and the country’s public finances.  The key points were:

Turning to public finances, the Chancellor said the following in the House of Commons:

“Our fiscal decisions are guided by three principles. First, while it is right to help people and businesses through an acute crisis like this one, in normal times the state should not be borrowing to pay for everyday public spending. Secondly, over the medium term, we cannot allow our debt to keep rising, and given how high our debt now is, we need to pay close attention to its affordability. Thirdly, it is sensible to take advantage of lower interest rates to invest in capital projects that can drive our future growth”.

I just wanted to finish by including the positive, opening remarks from IFS Director Paul Johnson:

“Another £65 billion or so of support for the economy this year and next, on top of the £270 billion already announced. Mr Sunak is not stinting on his immediate response to the economic damage caused by the virus and the lockdown. Keeping the furlough scheme going through to September and business rates support and VAT reduction for hospitality still partially in place to the end of 2021-22 is erring on the side of generosity. We have that support to thank for the now remarkably modest OBR forecasts of unemployment”.

I will be updating my website on a regular basis in the days and weeks to come on specific sectors mentioned in this Budget, so I would encourage constituents to regulalrly check for further updates.