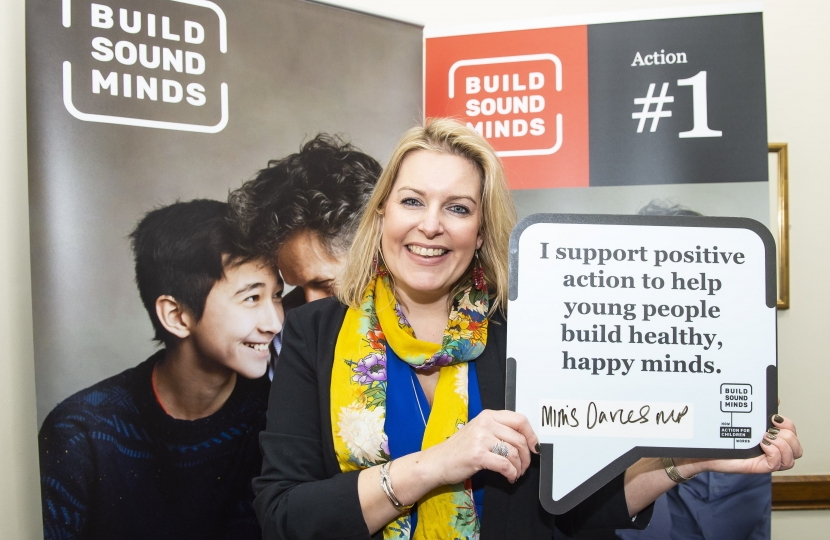 A third of 15 to 18-year-olds assessed by Action for Children were found to be suffering from mental health issues. Pupils in need of support have been taking part in the Blues Programme, the first ever UK-wide early help intervention for teenage depression.

“I have met with young people, their parents and teachers within my local advice surgeries, as well as during visits to local schools and colleges, and listened to concerns over young peoples’ mental health. It is both shocking and concerning that one in nine children between the ages of 5-15 are experiencing a mental health disorder, and it is vital that we tackle this issue.

“Acting early can help stop problems in their tracks and it’s vital we do everything we can, not only to help these young people, but to prevent these problems coming about in the first place.

“That’s why I’m pleased to be supporting Action for Children’s work through Build Sound Minds, and I encourage young people of all ages across Eastleigh to look out for their own wellbeing and to seek support early if they’re struggling.”

“Just like our physical health, our emotional wellbeing needs care and attention. And the first step in doing this is to create a positive conversation about mental health.

“Every day we support children and teenagers who are struggling for a number of reasons. Some are concerned about their futures, many are dealing with the intense pressure of school work and others are experiencing problems at home, all while navigating a complex 24/7 world with constant stimulation from social media.

“It’s no wonder that things can sometimes become too much for young people to handle. But with the backing of MPs like Mims, Action for Children can support young people to deal with their feelings from an earlier age, help prevent problems from starting and allow them to bounce back quickly if they do.”

During the Parliamentary event, the Eastleigh MP pledged her support to the charity’s campaign, which aims to improve children and teenagers’ mental health by providing families with accessible information, tools and tips.