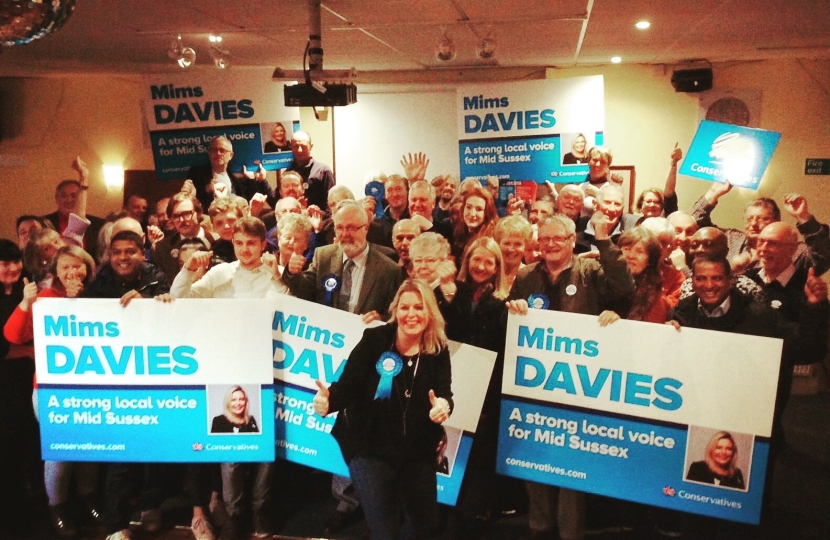 I am coming home and I am so proud to have been selected. I bring knowledge of this wonderful area, Government and Ministerial experience and a huge affection for the Association who gave me my start in politics. I am looking forward to working with fantastic local Conservative Councillors and a brilliant team of activists who really care about the community.   My campaign launched in Burgess Hill on Saturday 16th November where we had a street stall. Lovely to chat to local people. Much more to come - see you on the doorsteps!

I left Parliament at the end of the 2017-2019 session thinking I would never have the chance be an MP again. However, I was asked to consider standing as a local candidate here, and interviewed in public in front of over 200 local party along with two other excellent finalist candidates, to succeed titan of politics the Rt Hon Sir Nicholas Soames.

I have now been formally nominated following the Saturday night selection meeting where I won on merit. I have been overwhelmed at the real kindness and understanding shown to me by people both privately and publicly. The feedback from across the community has been lovely.

Selection as the new candidate here for my home seat has immediately ended my major problem of being pulled three ways after becoming a single parent and not being able to put my daughters’ interests first alongside my commitment to public life.  They go to school locally and the impact on them of continuing in Hampshire long term had to be resolved. I thank my Party for their understanding.

It was the only reason I left the Eastleigh seat, which I had personally turned to a significant 14,000 majority in the space of 4 years. I also believed that I wanted to allow Eastleigh to select a new candidate who was able to fully build on what I had achieved and was extremely proud of. I had a great local team and I had a huge amount of support.

I left Eastleigh not knowing what job I would have in the future and I certainly left it not thinking I would be selected for Mid Sussex, or any other seat for that matter. I had in fact already applied for new jobs in the charity and youth sector.

Despite some disappointing media reports which were, somewhat less understanding than the previous week's coverage, it’s a complete nonsense that I have abandoned anything or run to another constituency.

I am now truly looking forward to fighting to be the new Conservative MP where my daughters and I live, where I have the support of wider family and many friends plus where I was a well known local councillor.

If you want to get in contact on this or any other matter -  email: backingmims4midsussex@gmail.com

An explanation for those asking about any links to the current town centre redevelopment in Burgess Hill. I have been divorced since 2017, separated since 2015  and I have contacted the Registrar about this incorrect record today - 18th November 2019 - as it's been raised to me across social media. It's been a surprise that this has not been correct for some time as I have also signed the Ministerial code several times since my divorce.  I rightly declared my shares via marriage as required in 2015 and its very frustrating to see this misinformation raised across various platforms.

Somehow there has been a recording error and that affects what is displayed. This is both disappointing and pretty unhelpful. I pointed out that this is incorrect and now understand that my changes had not been actioned from some time back. There is an investigation into how this happened now underway.

Sadly now the previous Parliamentary session has ceased, it cannot be publicly rectified and/or now adjusted which I find unfair and personally  unhelpful. However, apparently this is how the system works !!

To anybody who wishes to understand more they are welcome to double check by calling the Commons Registrar, who suggested I write this note on my own website. Should I join the next Parliament, I will be able again to confirm that I have no links to this private company.

I want to see our villages and three towns thrive and will if elected will always hold all stakeholders to account on behalf of residents and businesses which I have record of in my previous role and I am very proud of.

On Thursday 24 September, the Chancellor announced the Winter Economy Plan – the next phase of the Government's planned economic response to coronavirus, following the Prime Minister’s address to the nation.