The railway has been closed between Lingfield and East Grinstead since 12 February when a railway embankment near Cookspond Viaduct, in Dormansland, began to slide. Since then, no fewer than five further sites have suffered landslips on the route and Network Rail has been working with BAM Nuttall to repair the line.

The line re-opened this morning for key workers and passengers where travel is absolutely essential.

Passengers needing to travel should check with Southern before travelling as a revised timetable is now in place due to the ongoing situation with COVID-19.

The first train from East Grinstead to London Victoria was the 06:12, this service and all others in the revised timetable are dependent on staff availability due to the Coronavirus.

Network Rail and Govia Thameslink Rail have recognised this is a crucial time, with so many key workers relying on the railways to get to their jobs. It is good the works were completed on schedule to support those who need to travel.

Due to the ongoing situation with COVID-19 and social distancing measures we will not longer be going ahead with the meeting with managers on 20th March. If constituents have any enquiries I encourage them to contact me and I will raise them directly with the Executive Team at GTR and Network Rail.

On Friday 20th March I will be at East Grinstead Station with local Councillors, commuters and residents to speak directly to managers from Govia Thameslink and Network Rail about problems the ongoing disruption is causing for local people. I hope those who have been affected by the landslip will join me to express their concerns to the representatives.

East Grinstead – Three Bridges rail replacement services will move from 2x buses every half an hour to 1x bus every 15 minutes to reduce congestion at East Grinstead station. This also provides an extra connection for the London Victoria – Three Bridges train that arrives at 22:45 with a 23:00 bus departure.

We will be using a different bus supply from Monday following feedback regarding the service provided by Travel Master’s buses. Unfortunately due to the number of landslips in the area, and subsequent demand for rail replacement services, this has taken a little longer than it would usually would but we are working with Go Ahead to move completely to alternative bus companies.

Introduction of a new peak time fast shuttle between Oxted and East Grinstead. This now includes an additional departure at 05:20 to connect with the first train departure at Oxted.

Today I have been in further contact with GTR and Network Rail regarding the Landslip and have requested further updates regarding Storm Jorge and the preparations which have been made and impact the storm may have.

I know many constituents and councillors are deeply concerned by long amount of time the station is proposed to be closed for and it’s daily. The proposed date of 30th March will mean the station will have been out of use for over six weeks and as a major terminus station this is far too long. I have attached a briefing I received from Network Rail and Govia Thameslink Rail yesterday evening before the bus crashed at Lingfield for your information.

I have been in contact with the Secretary of State for Transport, Rt Hon Grant Shapps MP, and Rail Ministers to escalate this matter and to make clear that a closure of over six weeks is too long. I have posted a copy of this letter on my website. I have also asked for assurances on disabled access, the lack of this is unacceptable particularly as Gatwick is being upgraded shortly and timetables updated.

Our local rail service is a vitally important part of our local infrastructure and with over 50% of those who work commuting out of Mid Sussex it is critical we have a functioning and efficient train service for all constituents in East Grinstead and beyond. I have met with the Town Clerk on this and other local matters last week.

In my dialogue with Govia Thameslink and Network Rail I have worked with their teams to be assured early commuters can reach London by 7 am, and ensured tickets are mutually accepted at Gatwick Airport and Three Bridges.

I have received deep assurances from Network Rail they will try to complete the work before the 30th March. I am committed to working hard to ensure the work is completed as soon as possible. It is vital constituents continue to make their views known to Network Rail too and I encourage those who have experiences to share them with Network Rail so they know just how serious this is.

Members of my team have also met with the Office of Rail and Road to raise these issues with their team.

Please see below the most recent update from Network Rail and GTR:

Repairs:
Unfortunately the line will be closed between East Grinstead and Lingfield until 30th March 2020, but we are constantly reviewing our plans to fix the landslips, and challenging each other to try and deliver it early. It’s a big job in a remote location in the middle of a wood – two separate landslips of 20m and 30m with an 800m road under construction to reach the site.
The first slip happened on 22 December but we were able to run trains until February 12, when it slipped too far to be safe. The second slip followed during Storm Dennis.
We will still have work to do on site after fixing the two landslips, as we will need to reinforce the section of railway in between the two slip sites. The plan is to repair the slip sites with piled walls and a regrade of the embankment.
The first landslip needs 6,000 tonnes of stone and second landslip needs 12,000 tonnes of stone, all to be delivered on 25 trains. We will be keeping passengers up to date with the progress of work on our Twitter feed @NetworkRailSE.

Services:
Unfortunately, journeys will take longer than usual and customers will need to use a replacement bus or an alternative route.
Travel advice for passengers using Southern services
Trains will run between London Victoria and Lingfield for most of the day.
Replacement buses will operate between Lingfield, Dormans and East Grinstead, and also between East Grinstead and Three Bridges, connecting with services to/from London.
Some early-morning and late-evening trains will only run between London Victoria and either Oxted or Hurst Green. Replacement buses at these times will be extended to run to & from Oxted or Hurst Green to meet these trains.
Travel advice for passengers using Thameslink weekday peak-time services
Thameslink will run a reduced peak-time service on weekday mornings and evenings.
Thameslink trains that do operate on this line will start at Oxted (for journeys towards London) and terminate at Oxted (heading away from London).
General advice for your journey
First Class can be used by Standard Class ticket holders on the following services, in both directions:
• Services between Lingfield and London
•Uckfield Line services, between Oxted and London Bridge only
If you hold a car park season ticket for East Grinstead or Lingfield, you can also travel from Gatwick Airport and use the South Terminal Long Stay car park - postcode RH6 0LL.
Additional parking is also available at Lingfield Park Racecourse.
For full details of your travel options during this incident, please visit East Grinstead landslip.
Travel arrangements with other operators
Southern and Thameslink tickets can be used with the following at no extra cost:
•Thameslink, Southern and Gatwick Express between Haywards Heath, Three Bridges, Gatwick Airport, Redhill (as applicable) and Central London
•Southern services between Uckfield and London Bridge
•Southeastern services between Tunbridge Wells / Tonbridge and London Charing Cross / Victoria / Cannon Street
•London Underground between London Terminals

Check before you travel:
You can check your journey for today using the National Rail Enquiries real-time Journey Planner.
You can find the location of your bus replacement by checking station signs or by searching for your station on our station information pages.

You may be entitled to compensation if you experience a delay in completing your journey. Please keep your train ticket and make a note of your journey, as both will be required to support any claim.
Feedback

We want to make information better - tell us how. Fill out this online Disruption Survey: https://alligator.focusvision.com/survey/selfserve/54a/190449?list=1&qs…?

I have also received the below following Monday night's incident:

Thank you for flagging this with us and it is disappointing to hear that constituents have experienced this. I’ve raised it with our Area Station Manager who is going to speak with the team - if you have any additional information such as times or dates then that would be welcome to help us identify the staff members in question.

With regards to the wider update, the team had planned to get in touch as unfortunately it has now been confirmed the line is now expected to be closed until 30th March. This is due to the complexity of the works associated with repairing the slip. Our teams are currently building an 800 metre long road to reach the site, due to its remote location and the works require steel beams being installed into the ground to build a wall to repair the embankment. Over 25,000 tonnes of new material to replace the soil lost in the slips will be delivered to the site by 25 trains. Network Rail have provided more information in the attached briefing document.

We are committed to resuming a normal rail service as soon as feasible. In the meantime we have put a number of options in place to support passengers during this period of disruption:

Network Rail have also agreed a temporary lease to the Lingfield Racecourse field car park on Station Road, this will provide an additional 100 car parking spaces close to the station. Network Rail have placed ground matting on the field and this opened today (Monday 24th February) and will remain open for the duration of the works. Directional signage is in place along Station Road.

We are working as hard as we can to re-open the line as quickly as possible and if it is ready earlier than the 30th March then we will of course open the line earlier.

Please see a copy of the letter I have sent to the Secretary of State for Transport regarding this matter: 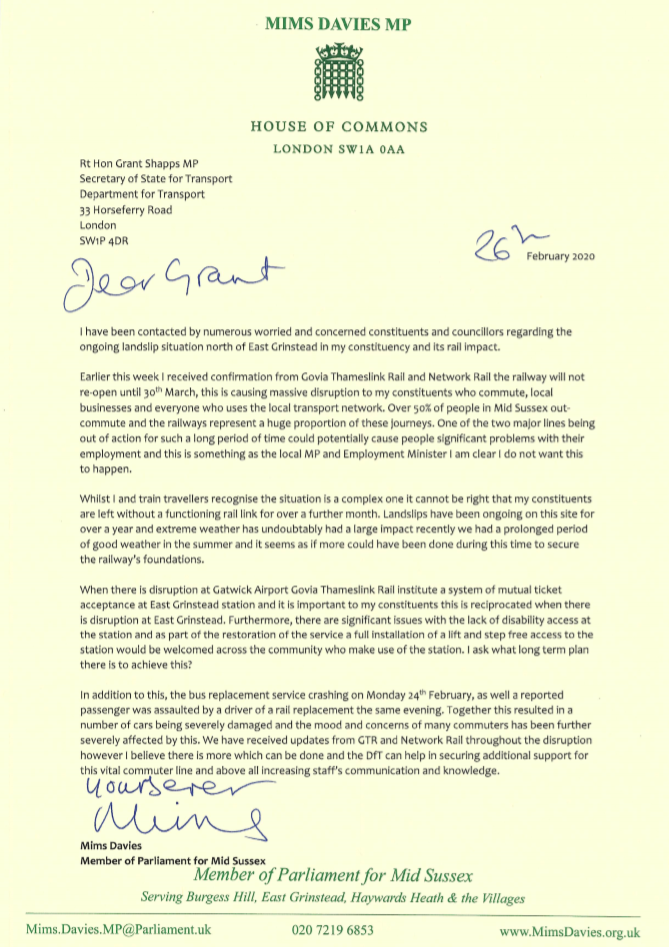