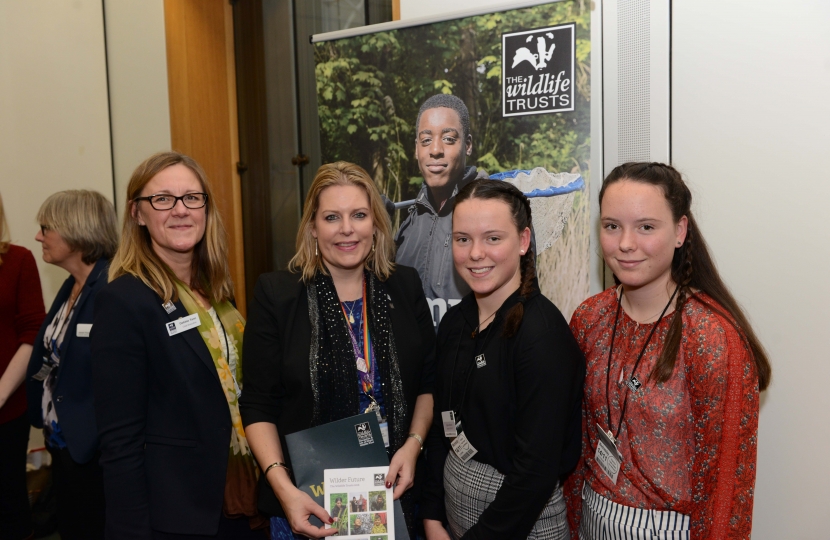 The local Member of Parliament for Eastleigh, Mims Davies, recently met local volunteers Alina and Sophia, together with the CEO of the Hampshire and Isle of Wight Wildlife Trust in Parliament to pledge her support to a ‘Wilder Future’.

“As ever it was great to again meet-up with Debbie who – alongside fantastic local volunteers and members of the Hampshire and Isle of Wight Wildlife Trust - does so much work around protecting and improving the local environment that we ALL care so much about, and I look forward to meeting with Debbie locally again soon and getting out on the Hamble.

“My constituents will be aware of my commitment to bringing forward an ambitious Environment Bill, and having worked alongside Ministers at the Department for Environment, Food and Rural Affairs, I know how committed they are to this important cause too!

“That’s why it was so great to chat with local Wildlife Trust volunteers Alina and Sophia during this event. Like me, they too are passionate about ensuring that our environment and everything that relies upon it is protected for the future, their future, and I will continue to work on behalf of all of my constituents on this matter."

“We've been so inspired by the passion of the young people we work with - all of whom want to see a wilder future. It is our responsibility to leave the next generation a world where nature is not in freefall, but instead is in recovery. An ambitious new Environment Bill is a once-in-a-lifetime opportunity to create a wilder future for us all - so its wonderful to see so many MPs voicing their support for this essential new legislation.”

As Eastleigh’s MP, Mims Davies has I successfully worked with local residents, local groups and the Woodland Trust to secure the strongest ever protections for ancient woodland and veterans trees within the Government’s updated National Planning Policy Framework. The local MP has also worked alongside Hamble resident Tim Leroy and the Surfers Against Sewage team on their campaign to bring about a reduction in plastic waste in our waterways - including in the River Hamble - and welcomed changes announced by the government to achieve this earlier this year.