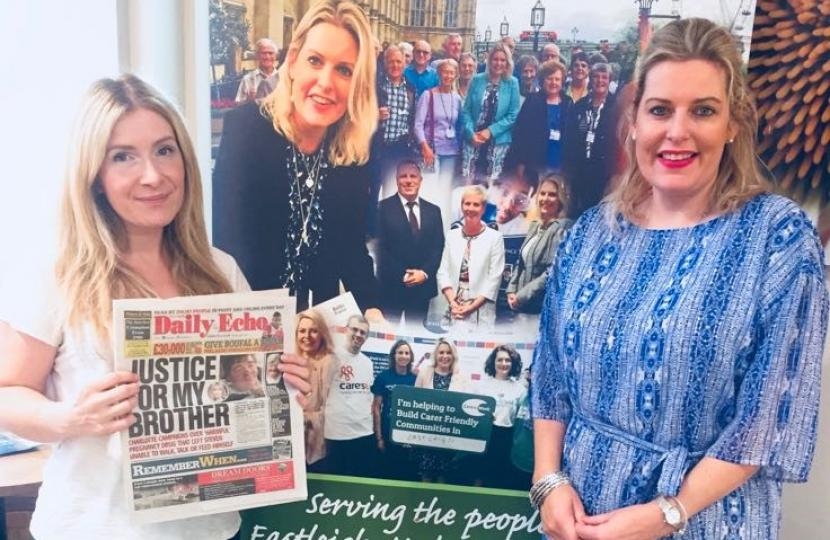 Today local MP, Mims Davies, has called for new action on behalf of her constituents after a groundbreaking study from Oxford University has linked the pregnancy test drug Primodos to malformations in babies born to mothers who used the drug.

The MP for Eastleigh has written to the Prime Minister calling for a judge-led inquiry, building upon questions that the Member of Parliament has asked in the House of Commons over the use of the pregnancy test drug, and a meeting last year with the Prime Minister at Number 10 when she raised a number of women health issues, including Primodos, Valproate and Vaginal Mesh Implants.

“The results of this in-depth study by Oxford University provide another example of why it is absolutely right – particularly for all of those families who have been waiting so long for justice - that there should be a chance to launch a public inquiry into this terrible scandal.

“Back in 2015, Charlotte Fensome came in to one of my local Advice Surgeries on behalf of her family, and shared with me the unimaginable hardship that she and her family faced as a result of the use of Primodos as a Hormone Pregnancy Test, and has fought for years to try and prove that there is a link between the use of Primodos and deformities. I hope that this new study will provide an opportunity to officially confirm that link.

“That is why I have today written to the Prime Minister, who I have met with previously over this matter, and asked for her to build upon the important progress that has been made in other areas under her leadership - such as with the contaminated blood scandal - by launching an independent, Judge-led Public Inquiry into Hormone Pregnancy Tests.”

The new study comes almost exactly a year after a report by the Expert Working Group (EWG) overseen by the Medicines and Healthcare Products Regulatory Agency (MHRA) was released, suggesting evidence wasn't strong enough to demonstrate a causal association – something that together with colleagues and affected families, the Eastleigh MP said was incredibly disappointing.

“Prof. Carl Heneghan's review of the evidence proves a conclusive link between Primodos and birth defects. It is a massive step forward in my fight for justice for my severely brain damaged brother Steven and for all the other victims of this terrible drug. I hope now that Bayer, the manufacturer, will finally hold their hands up and admit responsibility for the lives they have ruined and the suffering they have caused.”