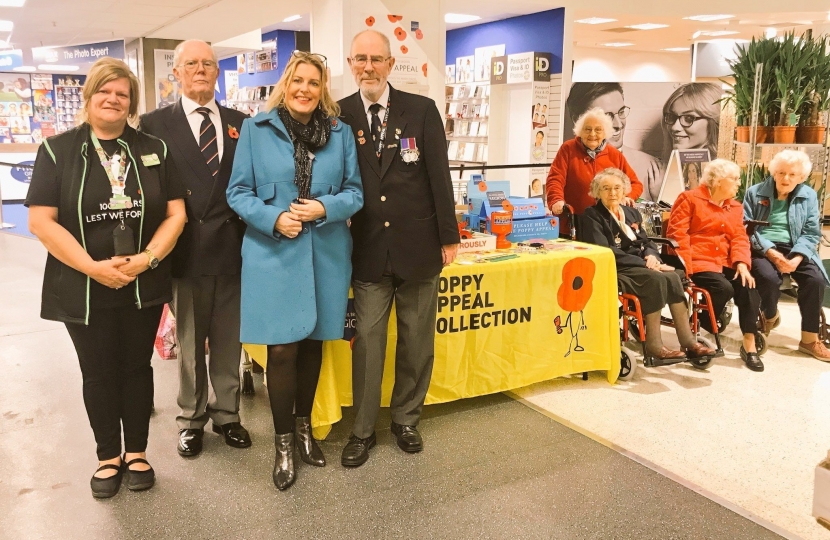 Today the Member of Parliament for Eastleigh, Mims Davies, attended a key debate in the House of Commons Chamber welcoming the introduction of a cross-Government Strategy for our Veterans which sets out the Government's aims and principles to ensure veterans are valued, contributing and supported over the next ten years.

Local MP Mims Davies until recently served as a Trustee of the veteran’s charity, Building Heroes, which provides skills training to Military Veterans, as well as support into employment in the building trade. She is also a keen supporter of the Royal British Legion, selling poppies at Asda in Chandler’s Ford last week, and laying wreaths at Remembrance Services across her constituency on Sunday.

Commenting, the MP for Eastleigh said:

“As a former Trustee of veteran’s charity Building Heroes, and having attended so many remembrance events last week, I was honoured to attend this key debate in the House of Commons Chamber this afternoon to welcome the introduction of a cross-Government Strategy for our Veterans.

“During my time as a Wales Minister, I was pleased to help facilitate work on this, with all four nations of the UK signed up to this Strategy, which will address the immediate needs of older veterans, as well as set the right conditions for society to empower and support the next generation.

“The debate covered a whole range of matters including PTSD, housing, job opportunities, mental health and supporting our former servicemen and servicewomen back in to society. There were some incredibly moving contributions in the debate, particularly by my colleague, the Member for Berwick-upon-Tweed.”

“This Strategy has the potential to do a huge amount of good in all of those areas, and is therefore something that I support whole heartedly on behalf of my constituents.”