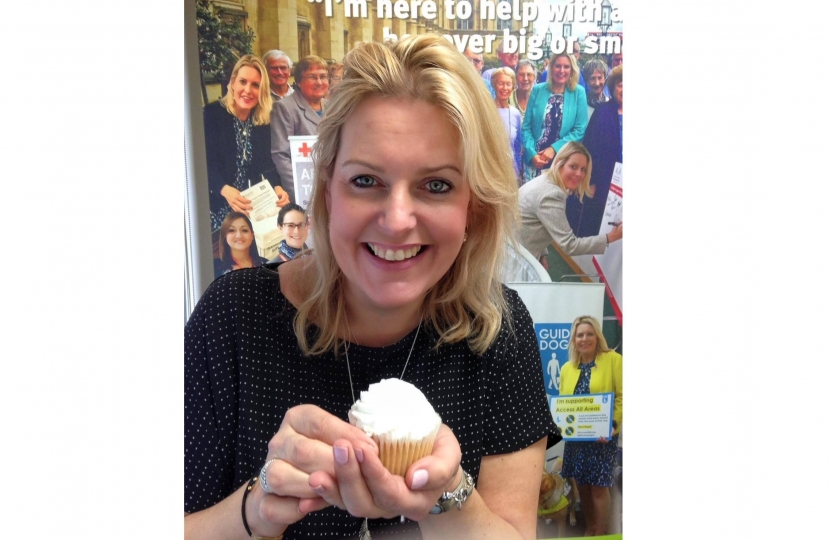 The Member of Parliament for Eastleigh, Mims Davies, is this year again supporting the Alzheimer Society’s national Cupcake day – due to take place on the 13th June 2019 - and aiming to raise awareness of dementia and money for fighting the cruel disease.

An estimated 8,500 people are living in West Hampshire with dementia, with an estimated 1,663 individuals living with dementia in Eastleigh. The local branch of the Alzheimer Society provides provisions and services such as a devoted Dementia Support Worker who can provide one-to-one support, helping to maintain the independence of those who suffer from dementia and improve their general well-being.

Commenting ahead of the day, Eastleigh MP Mims Davies said:

“During my time as Eastleigh’s MP and as former Chair of the All Party Parliamentary Group on Carers I have been proud to work alongside carers locally and on the national stage to raise awareness of just how significant they are to your communities. After visiting the Dementia Roadshow in Eastleigh last year, I am keen to continue supporting this great cause. By working together, we can beat dementia.

“The majority of these local people will be being cared for by their husbands, wives, or adult children and relatives. Characteristically, these people will rarely see themselves as carers, and as a result they are the hidden carers that we too often take for granted.

“I am therefore delighted to promote the Society’s Cupcake Day, an opportunity for communities to come together over cake – in my case a Gluten Free Brownie! – all while raising awareness and funds towards pioneering research, crucial support services and pioneering care.”

7 out of 10 individuals who suffer from dementia also suffer from other conditions or disabilities. Annually carers for dementia sufferers, who are often spouses or adult children, perform 1.3 billion hours of care, saving the government £11.6 billion.