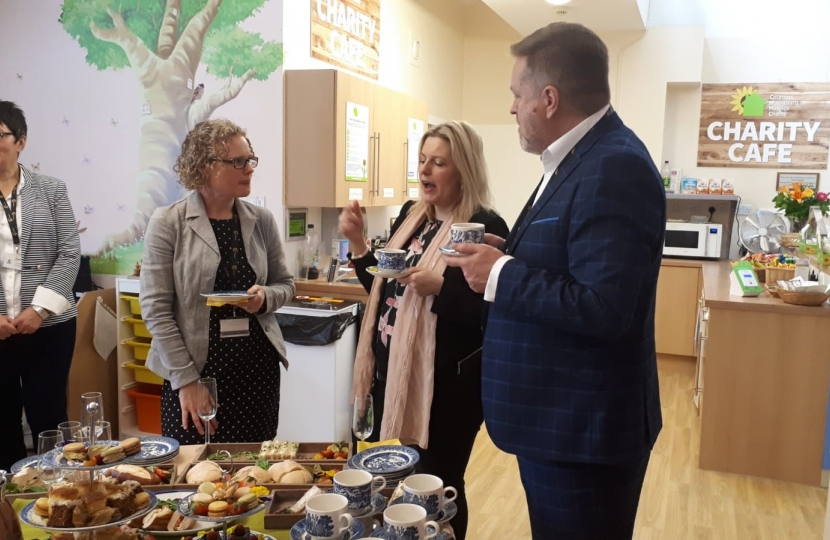 During a recent visit, the Member of Parliament for Eastleigh, Mims Davies, pledged to help Countess Mountbatten Hospice with its plans to increase services to support more people living with death, dying and bereavement.

Mountbatten Isle of Wight, which runs the Island’s Mountbatten Hospice, is now leading a partnership involving the NHS and Clinical Commissioning Groups to run Countess Mountbatten in Southampton.

Visiting ahead of Easter, Eastleigh MP Mims Davies pledged to continue discussions with Ministers over the ongoing challenges facing the hospice, in the hope it could attract extra grant funding to improve its building.

“It was really interesting to hear about the plans for Countess Mountbatten and the new and unique partnership. This is an example of local hospices coming together for the greater good and I support the partnership wholeheartedly.

“It’s clearly a very highly regarded hospice but there is a growing need for the care and support that it offers, therefore we all need to do more, and as Eastleigh’s local MP, I will be continue to speak with my colleagues in Westminster to see how we can help.”

A new Psychology and Bereavement service has already been launched at Countess Mountbatten and further new services and fundraising opportunities are being explored.

“It was a pleasure to welcome Mims to Countess Mountbatten. She took a real interest in what we’re aiming to achieve, especially how we want to reach out to the growing number of people who need us.

“We’re grateful for Mims’ continued support as we develop our plans to make Countess Mountbatten one of the very best hospices in the country.”