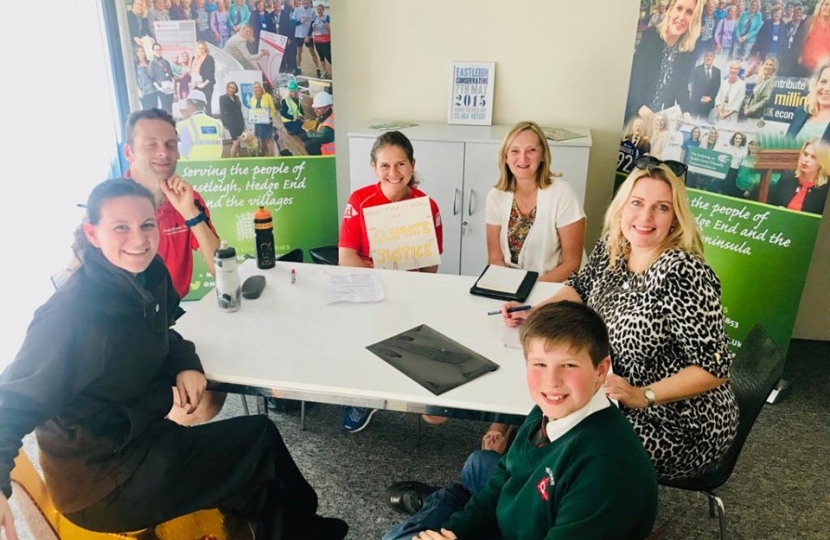 This year, the UK became the first G7 country to target net zero by 2050. Since 2010 we have reduced emissions by 25% and our new laws aim to end the contribution the UK makes to global warming by 2050. The UK also celebrated the longest run without coal for Great Britain since 1882 and introduced 41 new marine conservation zones.

Last week I met with local residents about how we can all work together to tackle climate change. It turned out to be a pertinent day for the meeting with climate protests taking place around the world, including in Southampton, and it being announced that the world’s biggest offshore wind park planned off the coast of England could generate power cheaper than by burning coal.

The key issues we discussed included reducing Green House Gas emissions from UK housing stock, supporting developing countries to protect their carbon sinks such as the Amazon rainforest, increasing safety for cyclists and incentivising use of public transport. I know how important these issues - as well as the broader issue of tackling climate change - are to people in our area, with them regularly filling my inbox, and was delighted when environmentalist Zac Goldsmith was promoted by the Prime Minister to the very centre of Government, working as a Minister both in DEFRA and DFID, as well as at the Cabinet table. At the meeting we all agreed that this is the issue of our time, and as Eastleigh’s MP I will always ensure it’s a priority.

Indeed, the Prime Minister has announced that he will make £10 million immediately available to help step up efforts to protect and restore the Amazon rainforest in Brazil - including in areas affected by the current fires. The new funding builds on support the UK has already invested to restore the rainforest in Brazil and neighbouring countries and will help safeguard the huge biodiversity of animal and plant species found in the Amazon.

During the G7 Summit, the Prime Minister urged countries to back Britain’s call to protect 30% of the world’s ocean by 2030 – to reverse the damage being done by overfishing, plastic pollution and climate change. Having worked alongside Ministers and the Department for Environment, Food and Rural Affairs on a number of key animal welfare issues, including most recently the Animal Welfare Sentencing Bill, which has been incredibly influential in strengthening the UK’s position as a global leader on animal welfare. I am also pleased to welcome a funding boost in addition to £7 million to extend the Blue-Belt scheme and protect and manage vital marine ecosystems in conservation areas around Britain’s overseas territories - supporting the protection of key species such as turtles, whales, fish, seabirds and wider marine life.

Outside the EU Britain can develop global gold standard environmental policies, taking a more targeted approach. Having left the Common Agricultural Policy we can use public money for public goods, rewarding environmentally responsible land use. Meanwhile, by leaving the Common Fisheries Policy we will be able to grant access and allocate quotas based on sustainability, allowing us to pursue the highest standards in marine conservation.