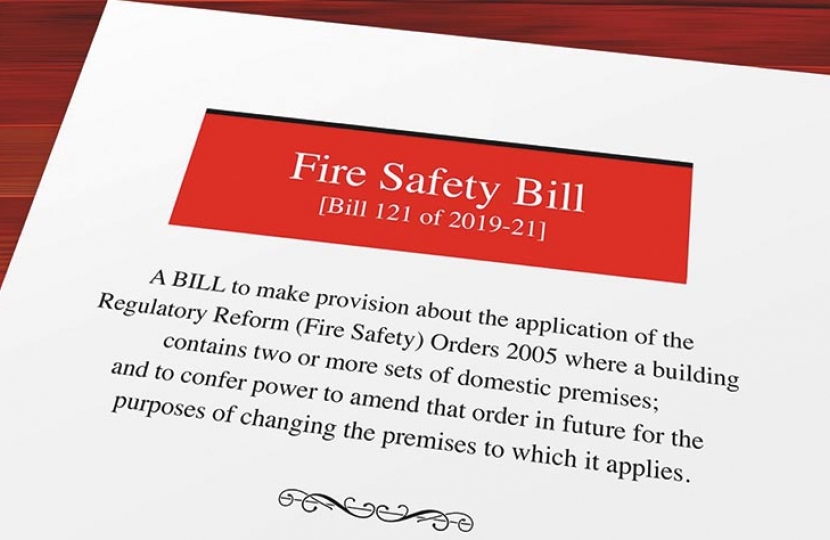 The Fire Safety Bill is an important first legislative step in implementing the Grenfell Inquiry Phase 1 recommendations and one part of the Government’s major building and fire safety reform programme.

I wanted to explain why I did not support the McPartland-Smith amendments to the Fire Safety Bill, following the debate on these in the House of Commons.

Ministers confirm they held a three-month consultation (the “Fire Safety Consultation”). The consultation sought views on proposals to strengthen the FSO, to implement the recommendations from the Grenfell Tower Inquiry Phase 1 report in a proportionate, pragmatic and effective way and to strengthen the regulatory framework for how building control bodies consult with fire and rescue authorities. The consultation closed on 12 October 2020 and our response will be published this spring.

The other key piece of legislation in this area is the Building Safety Bill, which was published in draft for pre-legislative scrutiny on 20 July. The Building Safety Bill, aims to put in place an enhanced safety framework for high-rise residential buildings, taking forward the recommendations from Dame Judith Hackitt’s review. The Bill will be introduced as soon as Parliamentary time allows, after Government has fully considered the Housing, Communities and Local Government (HCLG) Select Committee’s recommendations.

Together, the Fire Safety Bill, the Building Safety Bill, the Fire Safety Consultation and any amendments made to the FSO and regulations to implement the Grenfell recommendations (stemming following the outcome of the consultation) will create fundamental improvements to building and fire safety standards and ensure that residents are safe and feel safe in their homes.

The amendments are well intentioned, but they would not have the desired practical effect, indeed, would significantly set back the progress of urgent building safety reforms.  They would not fulfil the purpose of protecting leaseholders from all costs associated with building remediation – the provisions would only apply to those costs uncovered through the Fire Risk Assessment and not, for example, defects discovered as a result of an incident or other works taking place. It is not the comprehensive solution we are all working towards.

More importantly, the Fire Safety Bill, given its focused scope, does not have the necessary legislative detail needed to underpin the amendments in Regulations. It would require extensive drafting of primary legislation to make the amendments legally workable. Critically, this would result in significantly delaying the implementation of the Fire Safety Bill and the crucial measures it puts forward to improve the fire safety regulatory system.

Ministers confirm were the amendments to be added to the Bill and become law without such redrafting, the Government and taxpayer might be exposed to protracted action by building owners in the courts.  In this case I do not think we would be able to proceed with the Bill – delaying the Bill and its safety provisions further, which is not what any of us want to see.  In practical effect that means that Fire and Rescue services undertaking inspections and assessment of buildings would lack clarity of their powers to look at essential parts of a building safety system, tying their hands.

This also means a delay in implementing the recommendations of the judge in the first phase of the Grenfell Inquiry, which the government has accepted and sought to prioritise.

My colleagues in the Government made it clear they expected that a delay would also have very serious implications for the Building Safety Bill, which is already at an advanced pre-legislative stage, and for the new building safety regime, which we want to introduce as soon as possible.

During the debate in the House, the Minister for Crime and Policing, Kit Malthouse MP, stated the following on the aforementioned amendments:

“I should state that we agree with the intent to give leaseholders peace of mind and financial certainty. That is why the Government have recently announced that we will be providing an additional £3.5 billion to fund the removal and replacement of unsafe cladding, targeted at the highest-risk buildings. That brings the total investment in building safety to an unprecedented £5 billion.

“I know that my MHCLG ministerial colleagues have been in this place and debated this extensively and, having made the case to the Treasury, it was gratifying to see this money come forward. It will assist those who are living in fear in high-rise buildings in particular, but also those in mid-rise buildings, who, as I am sure my hon. Friend knows, will benefit from a financing scheme.

“Government funding does not absolve building owners of their responsibility to ensure their buildings are safe. We have been clear that building owners and the industry, as my hon. Friend has just said, should make buildings safe without passing on costs to leaseholders. They should consider all routes to meet costs including, for example, through warranties and recovering costs from contractors for incorrect or poor work.

“We have always been clear that all residents deserve to be and feel safe in their homes. We are working at pace to ensure remediation of unsafe cladding is completed, and we have an ambitious timescale to do so. As I said earlier, about 95% of high-rise buildings with Grenfell-type ACM cladding identified at the start of 2020 have completed remediation or had works on site by the end of last year. However, I am afraid the Bill is not the correct place for remediation costs to be addressed. It is a short but critical Bill to clarify that the fire safety order applies to the external walls, including cladding, and flat entrance doors in multi-occupied residential buildings. That means the responsible person must include those parts of the building in their fire risk assessment. That does not include the remediation of historical defects. It does not have the necessary legislative detail that would be needed to underpin such amendments in regulations. The Building Safety Bill is the appropriate legislative mechanism for addressing these issues, and it will be introduced in the spring. It will contain the detailed and complex legislation that is needed to address remediation costs.”

This Government already announced earlier this month that we would be implementing a new Five-Point Plan to remove unsafe cladding from high-rise buildings. This will take the form of a multi-billion pound intervention.

I have shared my thoughts on this intervention, as well as further details on the Five-Point Plan itself, here: https://www.mimsdavies.org.uk/news/government-multi-billion-pound-intervention-remove-unsafe-cladding

I hope this was helpful and has explained why I voted with my colleagues against the aforementioned amendments. I will continue to take a strong interest in this issue.