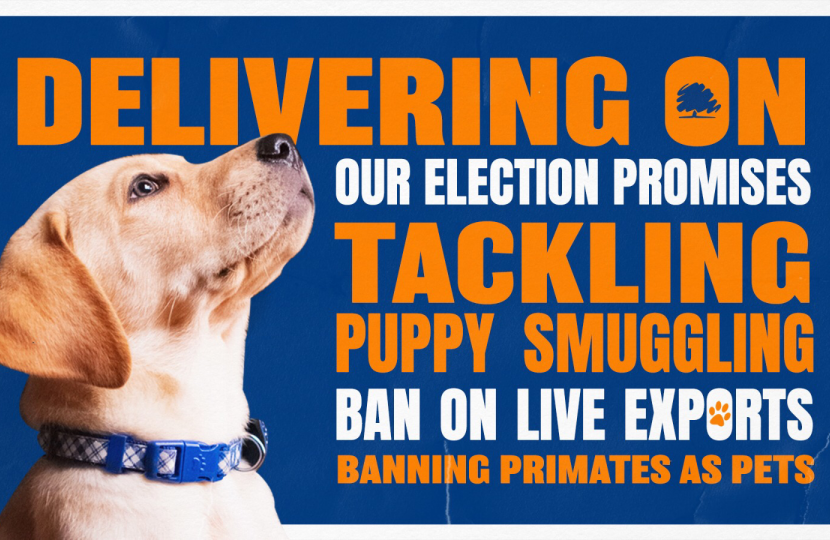 As you all know, Sussex has been particularly affected by the terrible act of pet theft over the past few months and I've been actively speaking with Sussex's Police and Crime Commissioner, Katy Bourne OBE, on this extremely concerning matter. As a dog owner myself, of a lovely cockerpoo called TJ, I know our family would be heartbroken if he was ever to be stolen. So I am pleased to report that Sussex police have recently arrested several people connected to these crimes, as well as increasing surveillance.

Furthermore, i was delighted to see the announcement on Saturday (8th May) that the Government have launched a national Pet Theft Taskforce, which has been set up to gather evidence to understand the factors which may be contributing to any rise in thefts and to recommend any necessary measures to tackle the problem.

The taskforce will be chaired by the Lord Chancellor, The Rt Hon Robert Buckland QC and be made up of government officials from the Department of Environment, Food and Rural Affairs, the Home Office and the Ministry of Justice as well as operational partners such as the police. It will seek input from animal welfare groups and experts in relevant fields to:

The full Terms of Reference for the taskforce can found at this link: https://www.gov.uk/government/publications/pet-theft-taskforce-terms-of-reference

Ministers are also taking the opportunity to consult on three separate mandatory scanning campaigns: Tuk’s Law, which would make it mandatory for vets to scan cats and dogs for microchips before putting them down; Fern’s Law, which would require vets to microchip cats and dogs when brought into a vet practice for the first time; and Gizmo’s Legacy to make it mandatory to scan for microchips when a cat or dog is found dead by the roadside.

These plans are part of the Government’s commitment to tackle crime and the impacts of crime, further strengthening the UK’s position as a global leader in animal welfare. They come alongside other measures including taking steps to end live animal exports and crack down on the illegal smuggling of dogs and puppies. Further proposals to improve standards and eradicate cruel practices are to be set out later this month

My office is always a point of contact for any information constituents may have, which we are then able to relay directly to relevant Government departments and the Police and Crime Commission.