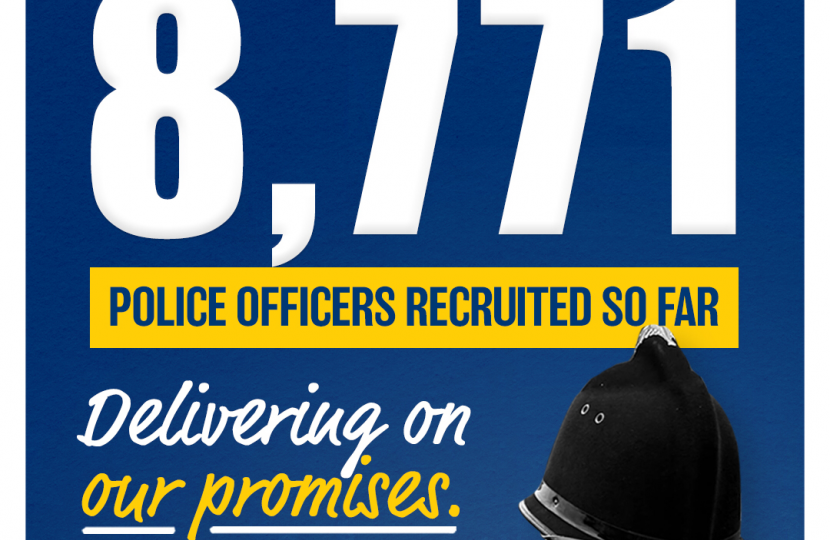 Today, the Government made the fantastic announcement that, just one year into our police officer recruitment programme, nearly 9,000 additional officers have been recruited across England and Wales, meaning we have smashed our first-year recruitment target and are well on track to recruit the extra 20,000 new police officers by 2023, which we promised in our 2019 manifesto.

Additionally, as part of this year’s £636 million boost to the police funding settlement, more than £400 million will go towards recruiting additional officers. This brings total police funding up to £15.8 billion for 2021-2022, including £400 million to recruit 20,000 new officers by 2023, £914 million for counter-terrorism policing, and £1.1 billion to target national priorities such as reducing serious violence and clamping down on county lines.

This Government have taken several steps to support our police officer and give them the powers and resources they need to keep us safe, including:

To build on this progress, we need Conservative Police and Crime Commissioners locally who will work with the Government to recruit police officers and cut crime.

Our brilliant, Conservative Police and Crime Commissioner for Sussex, Katy Bourne, is committed to this plan, and has the following, six-point plan to make our streets in Sussex safer:

I hope the information above, as well as the Government’s announcement about the success of our police officer recruitment programme, will reassure constituents that we are committed to cutting crime and supporting our police officers, as we build back better, greener and safer in the months and years ahead.