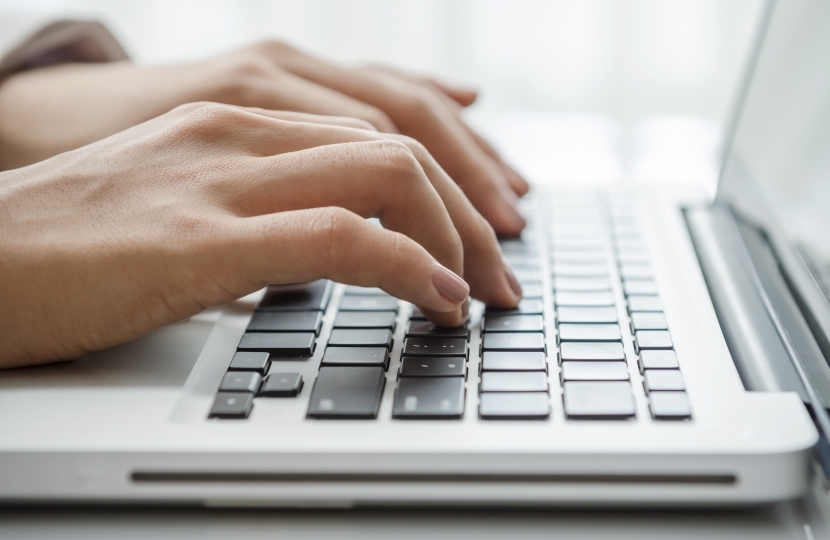 I know constituents will be interested to hear that on Wednesday 24th March, a crucial General Debate took place in the House of Commons on online anonymity and anonymous abuse, with a focus on the Government’s upcoming online harms legislation.

On 15 December 2020, the Government published our full response to the Online Harms White Paper consultation. This Online Safety Bill would introduce a duty of care to make companies responsible for the safety of their users online. This builds on our Conservative Manifesto commitment to make the UK the safest place in the world to be online, while at same time to defend freedom of expression.

The legislation will define what harmful content will be in scope. Principally, this legislation will tackle illegal activity taking place online and prevent children from being exposed to inappropriate material. The legislation will also address other types of harm that spread online - from dangerous misinformation spreading lies about vaccines to destructive pro-anorexia content.

As the UK’s independent communications regulator, Ofcom will be tasked with issuing codes of practice which outline the systems and processes that companies need to adopt to fulfil their duty of care. Companies will need to comply with the codes or be able to demonstrate to the regulator that an alternative approach is equally effective. Ofcom will have a duty to consult on the codes and must help all companies to understand and fulfil their responsibilities.

Prior to the legislation coming into force, the Government has published interim codes on terrorism and child sexual exploitation and abuse, due to the seriousness of these illegal harms. These are voluntary and non-binding but will help companies begin to implement the necessary changes ahead of Ofcom issuing its statutory codes of practice.

To ensure the effective implementation of the future regime, Ofcom will have robust enforcement tools to tackle non-compliance, including the power to issue fines of up to £18 million or 10 per cent of global annual turnover, whichever is the higher.

While the Government recognises that companies need to take responsibility for tackling abusive behaviour, including steps to limit anonymised users abusing their services, they have been clear that online anonymity is an important principle and should be respected.

“Online anonymity is an important principle of a free and open internet and there are many legitimate reasons why an individual would not wish to identify themselves online - including to protect whistle-blowers and empower victims of modern slavery and domestic and sexual abuse. Globally, anonymity can be especially important for allowing human rights defenders and journalists to operate, especially within authoritarian regimes, without fear of undue reprisal and detention.”

In addition, the Government’s response to the Online Harms consultation made clear the regulatory framework will address abuse online, including anonymous abuse, while protecting freedom of expression and the legitimate use of anonymity online by groups such as human rights advocates, whistle-blowers and survivors of abuse. The legislation, therefore, will not put any new limits on online anonymity.

The Government has been clear that being anonymous does not give anyone the right to abuse others. The police have a range of legal powers to identify individuals who attempt to use anonymity to escape sanctions for online abuse, where the activity is illegal. The Government is also continuing to review with law enforcement whether the current powers are sufficient to tackle illegal anonymous abuse online. The outcome of this work will inform the Government’s future position in relation to illegal anonymous abuse online.

In the context of online abuse and the difference between illegal and legal behaviour, the Government has stated the distinction is not particularly well understood. To rectify this, the Law Commission has reviewed the legal framework relating to abusive and offensive communications online and are now consulting on their provisional proposals, which aims to improve the existing communications offences, ensuring the law is clearer and more effectively targets serious harm online.

The Law Commission is expected to provide its recommendations for reform of the criminal law in this area in 2021. Once the final recommendations have been published the Government will consider, where appropriate, whether to bring these recommendations into law as part of the Online Safety Bill.

I wanted to finish by including the eloquent thoughts of my colleague, the Minister for Digital, Culture, Media and Sport, who succinctly outlined the complexity of this issue, and the Government's commitment to stop vile, online abuse:

"Let us be clear: free speech is crucial, and a climate of fear creates a crisis for freedom of speech. That is why the Government’s online safety Bill is so important. For the first time, the social networks on which so much of this abuse is hosted will be required to enforce terms and conditions that ban abuse and protect free speech. That is important not just for anonymous abuse; it is important in tackling the abuse that is far too prevalent from those who use their real names, too. Abuse online or offline, anonymous or obviously identifiable, is not acceptable, and this Government are balancing the benefits of anonymity for those who need it, free speech and the right of every citizen to feel safe."

I hope this was helpful and informative!