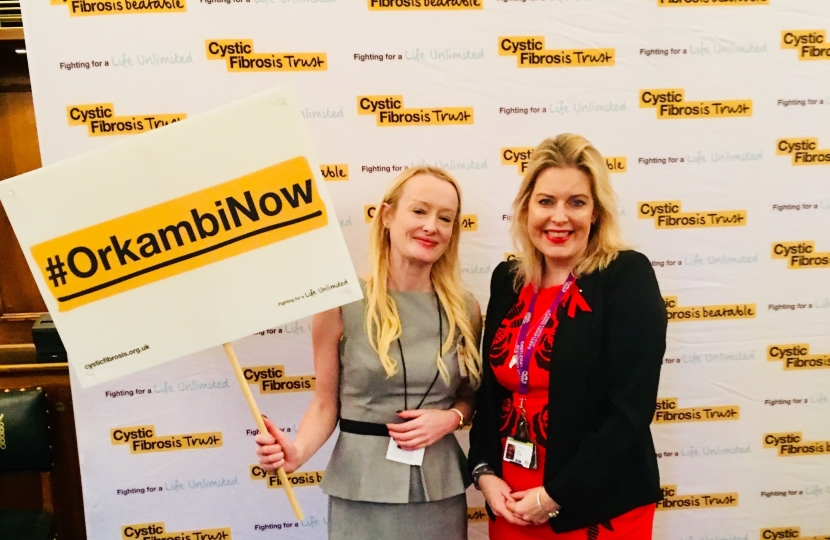 The Member of Parliament for Eastleigh, Mims Davies, has welcomed a huge breakthrough in a campaign to provide the drug Orkambi and other life-extending Cystic Fibrosis drugs on the NHS, following the ‘Orkambi Now’ campaign which as Eastleigh’s MP Mims Davies gave her backing to.

The announcement follows the efforts of the Government to reach a deal between the NHS, NICE and the drug provider Vertex that is good value for money for the NHS and will improve thousands of lives across the UK.

“I am absolutely delighted by this news today. It will make a huge difference to many of my constituents living with Cystic Fibrosis and will be a real relief for their families, and I know that like me, they will be delighted by todays news.

“There are over 10,000 people suffering from Cystic Fibrosis in the UK. Last year, half of those who died with the condition were under the age of 32. Orkambi could significantly improve those statistics, changing the lives of those affected.

“That’s why this news, meaning that our communities will have access to this life-extending treatment, is such an important breakthrough. I am delighted as Eastleigh’s MP to have supported this campaign, and would like to thank all of those who have worked so hard to achieve it, including the Health Secretary Matt Hancock.”

“This is a very special day and I want to thank people with cystic fibrosis, their families and everyone who has been part of this campaign for their persistence and determination to keep on fighting. We know it doesn’t end here – we will continue to fight for similar access in Wales and Northern Ireland so that all people with cystic fibrosis in the UK are able to benefit from these life-saving drugs.

Patients should be able to get the drug within 30 days, which improves lung function and can be given to children as young as two.

Two other drugs made by Vertex - Symkevi and Kalydeco - will also be made available as part of the deal.