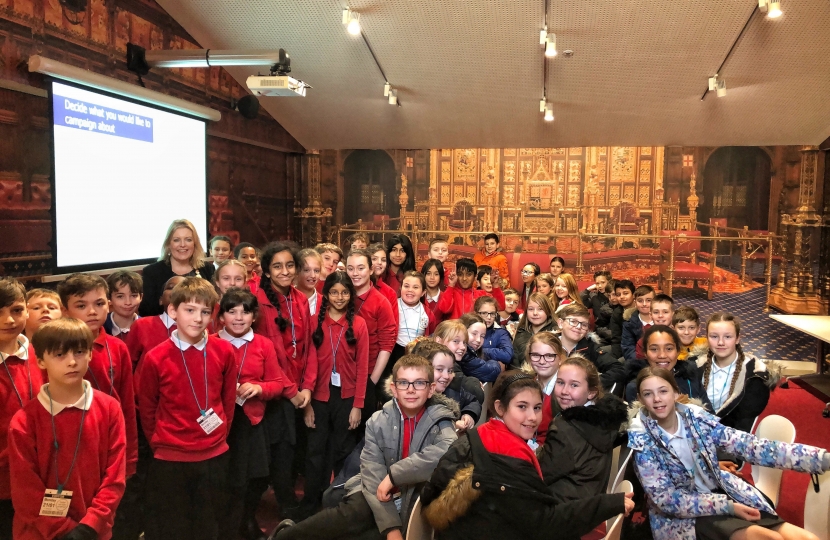 On Monday morning, local MP Mims Davies joined students from Hedge End’s Shamblehurst Primary School following their full tour of Parliament to discuss her role both as their local MP and as the Minister for Sport before asking students about the issues that they care most about.

While unsurprisingly the environment came top of the list, students also raised littering and too many houses being built as issues that they care most about. The local MP also spoke about her time working with Ministers at the Department for Environment, Food and Rural Affairs during which time the strongest protections were put in place to protect ancient woodland at home and elephants in the wild around the world.

“It was fantastic to welcome the students and staff from Shamblehurst Primary school to Westminster this week. It’s always really great to hear their views and listen to the issues that they care about most in our area, as well as nationally and globally.

“I know that the Year 5’s at Shamblehurst are doing a really great project about reducing plastic, and it was clear that like so many of us, they had been inspired by the campaigns and media - particularly programmes like Blue Planet - to do more to safeguard our planet for the future.

“The children were thrilled to be greeted by their local MP, Mims Davies, and were inspired by her journey into her current role. The children have come away from the experience motivated: they have been thinking more deeply about the changes they want to see in their wider community and how they can help to make these changes happen.”