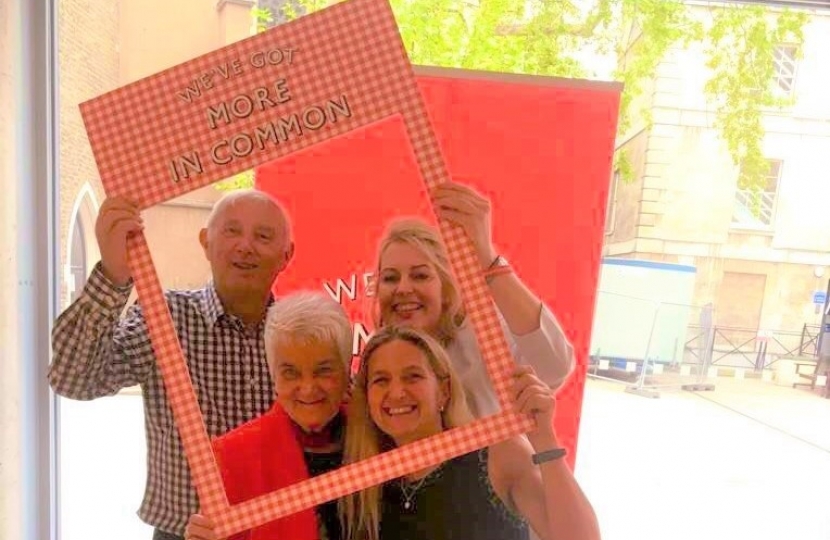 Following a meeting with Kim Leadbeater, the sister of former MP Jo Cox - who was tragically murdered in her constituency in 2016 – Eastleigh MP and Charities Minister, Mims Davies MP, has pledged her support for The Great Get Together held in Jo’s memory.

Mims recently met Kim Leadbeater and representatives and volunteers from the Jo Cox Foundation at a meeting in Parliament to discuss this years’ Great Get Together.

The Minister for Charities and Loneliness and Eastleigh MP Mims Davies said:

“We need to remember that while we may have our differences, we have far more in common than that which divides us. So many volunteers all over the nation give up their time to continue Jo’s valuable legacy. That’s why I am pledging my support for the Great Get Together this June, in memory of Jo Cox.”

“Having attended the foundation’s national #MincePieMoments Great Christmas Get Together campaign, I am delighted to see Jo’s legacy continue to make such a positive impact, uniting people across the UK.”

“This year’s Great Get Together will take place on 21-23 June, over what would have been Jo’s 45th birthday weekend, and its theme is ‘Let’s Get Back Together’. It’s a chance for people across the country to reconnect with old friends, neighbours and family members and to meet others in their communities who they may not already know.”

“We are going through turbulent times politically and there’s a lot of attention at the moment on the things that divide opinion, but for me that’s no reason not to try to do something positive that can help bring communities together.”