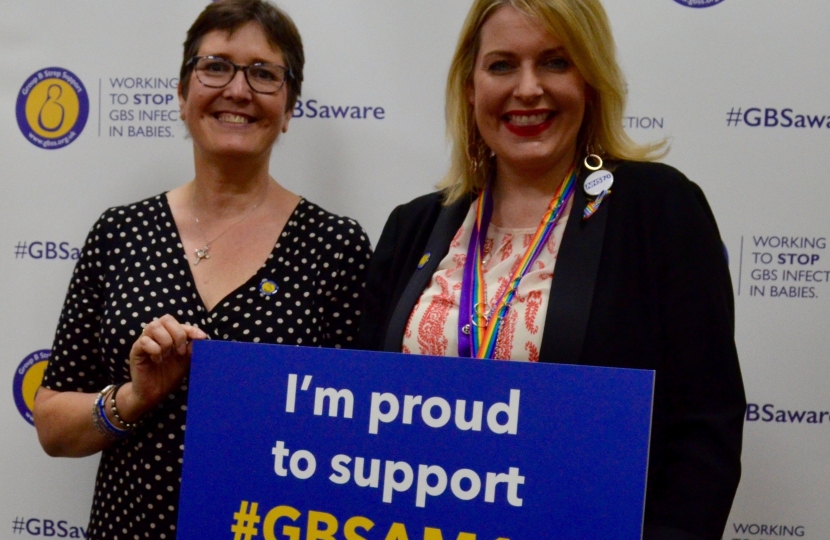 As part of July’s Group B Strep Awareness Month, Eastleigh MP Mims Davies called for more to be done to improve awareness of group B Strep.

Group B Strep (also known as Strep B or GBS) is a normal bacterium carried by around one in five adults, usually with no symptoms or side-effects. It is also the most common cause of life-threatening infection in newborn babies. These infections can be very serious and can cause conditions such as sepsis, pneumonia and meningitis. If left untreated, a GBS infection can kill a newborn baby within hours.

“Group B Strep causes potentially fatal infection in newborn babies, but shockingly around one in every five pregnant women haven’t even heard of it.

“I’ve supported Group B Strep Support’s work since my election in 2015, working with constituent and campaigner Lindsay Birkett to make sure every pregnant woman in Eastleigh is told about group B Strep.

“I have spoken in the Commons chamber, working cross-party to ensure that the Government’s maternity strategy tackles these ongoing tragedies, and I’ve also been in touch with the University Southampton NHS Trust to ensure that they are in line with national recommendations and best practice.”

"Knowing about group B Strep when you’re pregnant and in the early weeks after birth can make a massive difference – most group B Strep infections in newborn babies can be prevented, and early treatment can and does save lives. We hope our information leaflet will be a good start to raising awareness of GBS but more still needs to be done to make sure that no pregnant woman is left in the dark. "

I want to hear more from Mims