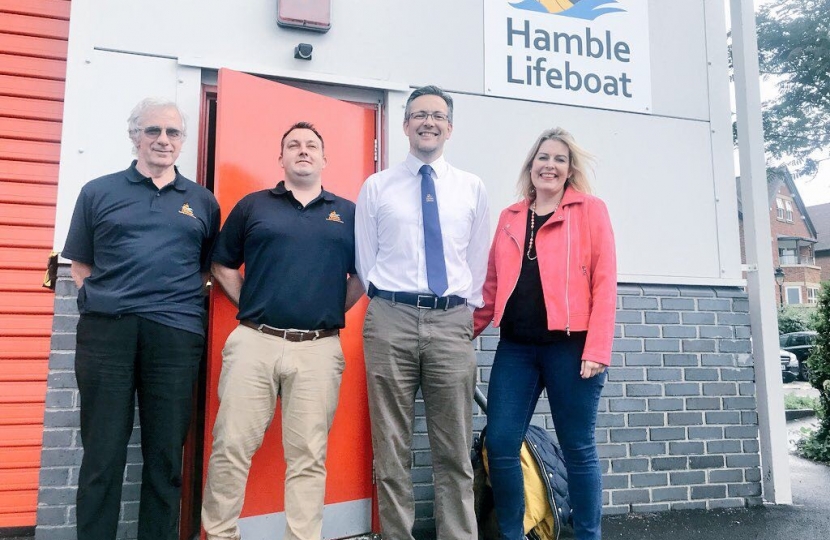 The Member of Parliament for Eastleigh, Mims Davies, is hosting independent lifeboats in Parliament on 16th October for an Afternoon Tea Reception in the House of Commons. Independent Lifeboats from across the country have been invited, including the local Hamble Lifeboat and GAFIRS, from just along the coast in Gosport. The event is being generously sponsored by SC-Group, SCISYS and Bosch Rexroth who will be sending representatives to the event.

The RNLI will also be in attendance and members of their executive team will be available for MPs, lifeboat volunteers and business leaders to discuss the issues which affect all lifeboats.

“I’m really excited to be welcoming Hamble Lifeboat to Parliament. Many MPs have invited lifeboats from their constituencies and I’m really looking forward to seeing charities from across the country be able to discuss their work with each other and support further partnerships.

“The event is being kindly sponsored by companies with strong maritime links: SC Group, SCISYS and Bosch Rexroth; and being attended by executives from the RNLI and with the Maritime Minister Nus Ghani invited too, there will be great opportunities for Independent Lifeboats from across the UK to raise their profile and share ideas.”

“We are delighted with the invitation from Mims Davies MP to attend the House of Commons on 16th October this year. This will allow independent lifeboats and rescue services, such as ourselves, the opportunity to further the awareness of what we do for Search and Rescue around the coastline of the UK.

One of the largest challenges for independent lifeboats is to educate the public that we receive no funding from the RNLI; we rely on the generous donations of the public and local businesses to ensure we can provide an appropriate, safe and well-trained service. We operate under the UK Coastguard in the same manner as the RNLI and are regularly called upon to facilitate rescues. Hamble Lifeboat has averaged around 100 taskings per year since 1969. All our Trustees, Coxswains, Crew and Support Team are volunteers from our local community and give up their time freely to operate the service.

We hope that this visit will bring the work independent lifeboats do to the forefront of the UK SAR agenda and increase public awareness and support.”

“We are pleased to support the brave and courageous people who volunteer to save lives at sea and operate in such a challenging environment.  Correspondingly our engineering ethos is to dare to innovate and equip those brave people to perform their tasks safely and effectively”.