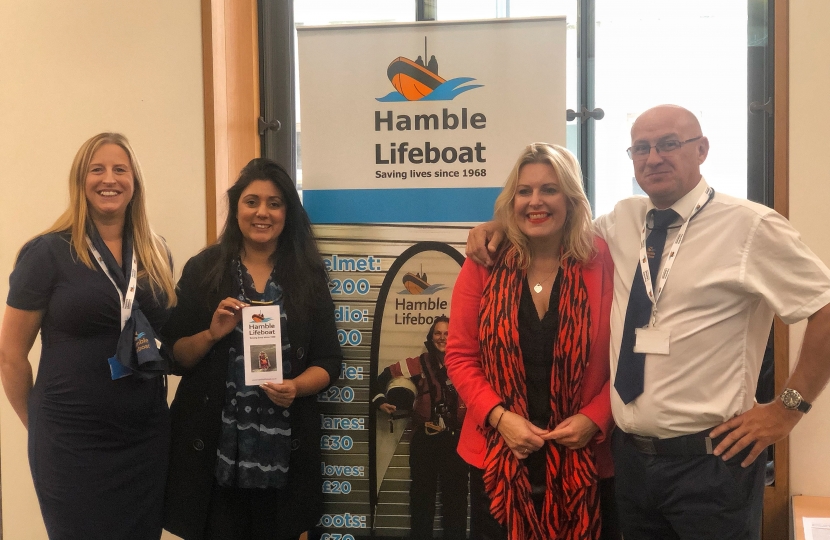 The Member of Parliament for Eastleigh, Mims Davies, welcomed Independent Lifeboats including the Hamble Lifeboat, from across the country to a first Independent Lifeboats event  in the Attlee Suite in the House of Commons on Wednesday 16th October. This event was a real breakthrough in learning and sharing and raising awareness of their incredible lifesaving and community work.

Hampshire and the Isle of Wight were well represented with six Lifeboats attending from our local area alongside Hamble Lifeboat, including the Solent Sea-Rescue Organisation(SSRO), a charitable organisation who work to assist Independent Lifeboats in the preservation of life and prevention of injury at sea on the foreshore of the Solent and on the beaches of the counties of Hampshire and the Isle of Wight. Other Lifeboat teams attending were from as far afield as South West Wales, Norfolk, Lancashire, and Yorkshire.

“I was really pleased to welcome so many brilliant Independent Lifeboats from across the country to Parliament on Wednesday this event started as a promise I made to Hamble Lifeboat to help them be understood for the huge daily work they all do. To give them a chance meet and network with their colleagues from all parts of the UK and I am grateful to our kind sponsors, as well as the RNLI, for their vital support in helping make this event happen. I know that there were many constructive conversations taking place throughout the event focusing on the best ways to make sure all our coastline and waterways are safe for everyone who wants to make the most of them.

“This reception was a great opportunity for independent lifeboats to share ideas, network and relax after a long hot summer of work and enjoy Afternoon Tea courtesy of our generous sponsors: SC Group, SCISYS and Bosch Rexroth. It was also brilliant to joined by our excellent Maritime Minister Nus Ghani MP, who made time to show her appreciation to the sector and all they do in so many communities.”

“I am proud of the long tradition of independent lifeboat charities we have in the UK. Our search and rescue volunteers show unrivalled bravery and dedication every single day – standing ready to respond and often risking their lives to save others.

“That is why we continue to support them to carry out this work, including through our Rescue Boat Grant Fund, which enables the purchase of vital equipment to keep communities safe.”

“We (The representatives from Hamble Lifeboat) were delighted with the opportunity that Eastleigh MP Mims Davies provided to meet and interact with other Independent lifeboats from across the UK.  The reception provided an opportunity to engage on a variety of common issues faced by independent lifeboats and to raise much needed awareness amongst the many members of parliament that attended – this included highlighting the continuing importance of the Department for Transport grants and the Rescue Boat Grant Fund, for which Hamble are extremely grateful recipients.  We hope to be able to make this an annual event, and engage with the wider emergency services, Coastguard and RNLI with whom we work on a daily basis.  Our thanks go to the sponsors and organisers of this years’ event”

“We were thrilled to be able to sponsor an event for the Independent Lifeboat Stations and see some of their hard work being recognised by Parliament, I was humbled by their stories of saving lives on a volunteer basis whilst being self-funded.  The Independent Lifeboat Station are a credit to the UK and we would be delighted to be able work with them in the future.”

“It was great talking to the Rescue Crews [on Wednesday] and hearing the fantastic work that they do day in and day out. At Bosch Rexroth we are proud to work supporting this sector in the UK, providing state of the art equipment. It was also great to support and help make the day a great occasion for these teams.”