Mims Inspires Women from all Backgrounds into Parliament 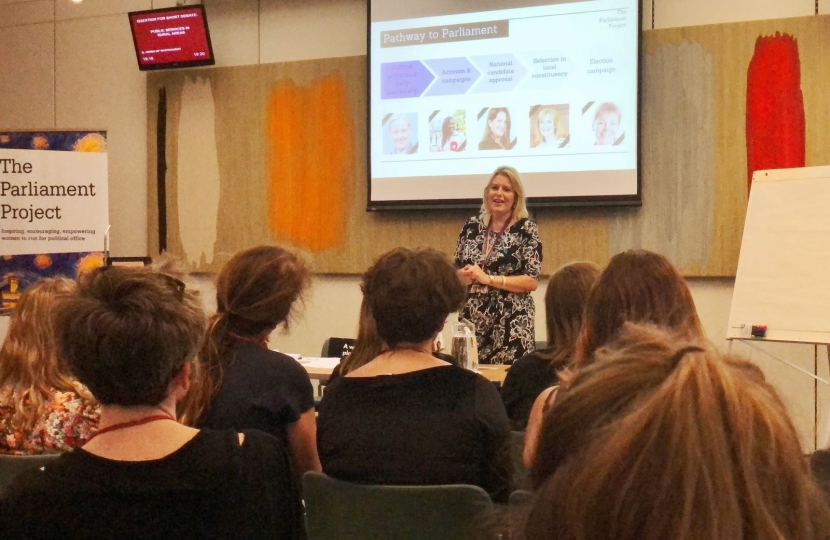 As the UK marks one hundred years since some women won the right to vote in elections, Eastleigh’s first female MP, Mims Davies, spoke at an event in Parliament on how and why she decided to run for election, and why it is so important that women put themselves forward.

The event was organised by The Parliament Project, a non-partisan project part-funded by the Joseph Rowntree Reform Trust which aims to empower and encourage women to run for political office in the UK.

“I had a super time speaking and taking questions from a really engaged room of women, all of whom I’m hoping will put themselves forward for election in the future.

“As the 380th woman elected to Parliament, and as we celebrate 100 years since some women won the right to vote for the first time, I am proud to have so many female colleagues sitting alongside me in the Commons. This leads to better debates and better outcomes, and, I want to see even more women sitting in Parliament in future!

“That is where organisations like The Parliament Project come in to their own and why they are so important! I would like to thank all of the women that came along, and organisers Vicki and Hannah for bringing the whole thing together.”

Mims Davies is a former Chair of the All Party Parliamentary Group on Women in Parliament. The Eastleigh MP also served on the Women and Equalities Select Committee, which held its own investigation into why more women weren’t being elected as Members of Parliament.

“The story Mims shared was an enormous inspiration to myself and to all of the women in the room. Hearing that it really is possible to juggle a young family with political life was such a strong message.

“It is vital that women support and encourage each other to stand for elected office. Many women have been encouraged to stand for political office after attending one of our workshops and I have no doubt that we will hear of others who were in that room with Mims and were subsequently encouraged to give it a go.”

More information about The Parliament Project can be found at: www.parliamentproject.co.uk