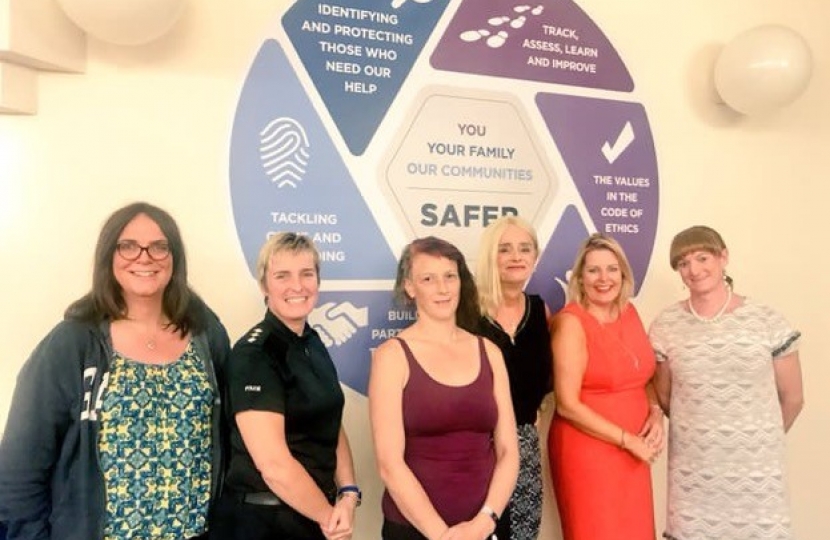 On Monday evening, the Member of Parliament for Eastleigh, Mims Davies, joined people from across the region at an event organised by Eastleigh constituent and LGBT+ campaigner, Tara Maclachlan in conjunction with Hampshire Police’s force lead on LGBT+ and gender equality, Chief Inspector Julie Fry.

The local MP has been working with both Tara and Chief Inspector Fry on LGBT+ issues since her election as the Member of Parliament for Eastleigh in 2015.

Held at the Hampshire Constabulary Training HQ in Netley, the event brought together professionals from Hampshire Police, the Prison Service, local youth service leaders as well as a number of charities and people who identify as Transgender and others from the wider LGBT+ community.

In July 2018, the Government launched a consultation asking how the government might make the existing process under the Gender Recognition Act a better service for those trans and non-binary people who wish to use it. Monday’s Forum Group discussed a number of the questions contained within the consultation, as well as wider concerns facing the LGBT+ community.

“It is always SUCH a delight to attend these events which are so welcoming. I have worked closely with Tara and Jules throughout my time as Eastleigh’s MP, and it was great to join them and many others from both within and outside of the LGBT+ community for this local event.

“Next month, Eastleigh will host its first Pride event, and I am looking forward to joining the local community to celebrate how far we have come on LGBT+ rights in the UK, but also to recognise that much more remains to be done.

“This consultation on the Gender Recognition Act is another important step forward, and it was really interesting to hear the heartfelt views that people in the room shared on Monday evening, and why this consultation is so important to them personally, as well as the community that they identify within.

“My thanks again to Tara and Jules, as well as all of those who took the time to take part.”

“It was a pleasure to welcome so many people with both a professional and personal interest in reforming the Gender Recognition Act; the discussions were fun, intense and inclusive. It was also so good to hear that all agreed that changes to the act are needed to streamline the process of obtaining a Gender Recognition Certificate.

My thanks to all who took part in particular to Chief Inspector Julie Fry and to Mims for her long standing and continuing support of the Transgender Community.”