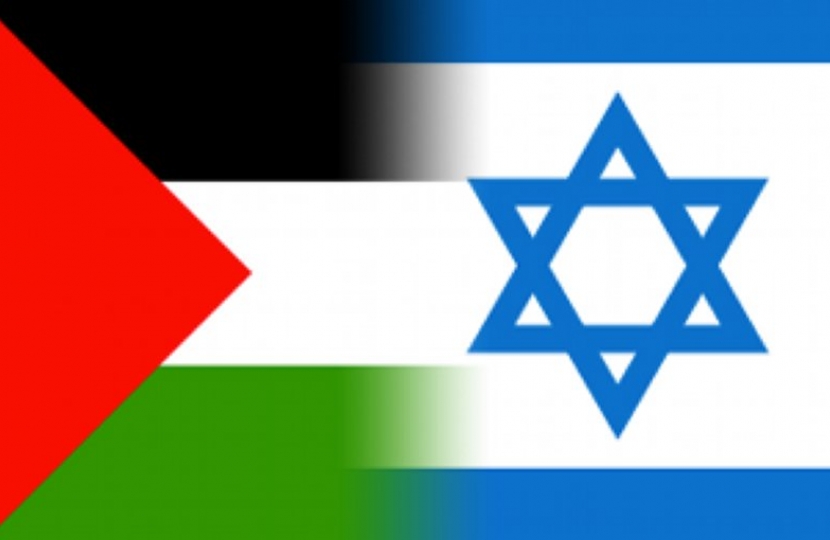 I want to make it clear I am extremely worried about the rapidly escalating violence in Israel and Palestine. Innocent lives are being lost and it is vital peace and stability is restored as soon as possible. I join with my colleagues in believing the best way to achieve this is through a two-state solution.

In the House of Commons yesterday, my colleague, the Minister for the Middle East and North Africa, James Cleverly MP, made a statement during a debate on the violence in Israel and Palestine, in which he outlined the UK’s commitment to helping de-escalate tensions and find a swift, peaceful solution to end the tragic deaths of civilians. He stated that:

“The recent escalation in violence in Israel and the occupied Palestinian territories is deeply concerning. It is the worst violence seen there for several years. As the Prime Minister and the Foreign Secretary have made clear, this cycle of violence must stop and every effort must be made to avoid the loss of life, especially that of children. The UK offers our deepest condolences to the families of those civilians killed. Civilian deaths, both in Israel and Gaza, are a tragedy.

“We urge all sides to refrain from any kind of provocation so that calm is restored as quickly as possible. As we enter the final days of the holy month of Ramadan, restoration of peace and security is in everyone’s interest. The UK will continue to support that goal.”

The full debate, and my colleague’s statement, can be read here: Violence in Israel and Palestine - Wednesday 12 May 2021 - Hansard - UK Parliament

The Government have taken a number of recent steps to bring about an end to this violence, including:

I also welcome that officials from the UK Embassy in Tel Aviv have repeatedly raised concerns with the Israeli authorities about the increase in evictions and demolitions of Palestinian properties.  The UK’s support for Israel’s right to self-defence does not extend to support for the annexation plans for part of the West Bank. Our friendship with Israel does not prohibit our criticism of some Israeli policies, nor our recognition of Israel as a thriving democracy.

Respect for human rights underpins the UK's foreign policy; Ministers and officials regularly raise concerns with the Israeli and Palestinian governments, where they exist, for this reason. Indeed, Israel and the Occupied Palestine Territories (OPTs) are a human rights priority for the FCDO, as documented in the most recent Human Rights and Democracy Report last year, which you can read here.

I am confident that ministers and British officials will continue to engage with both sides, as well as our international allies, to resolve this escalation as soon as possible. I will continue to wholeheartedly support these efforts and follow developments closely, as well as engaging with my ministerial colleagues in the FCDO where I can, on behalf of all constituents.