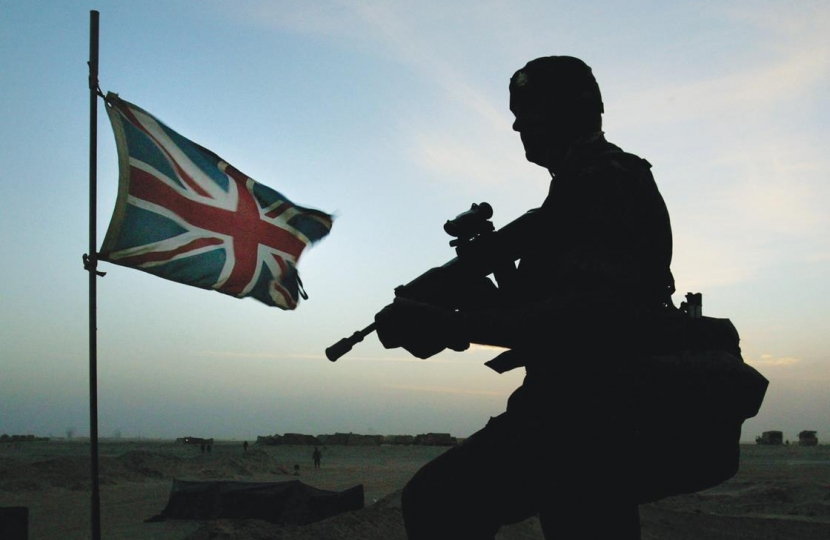 Last week, the Government’s Overseas Operations Bill returned to the House of Commons for its final stages of debate, and votes on proposed amendments. This Bill has been designed to give veterans and service personnel the protections required in endless prosecution cases, legal cycles and repeated investigations, and I wanted to take this opportunity to share my thoughts on this vital legislation with constituents.

Our Armed Forces put themselves in harm’s way day in, day out, to keep our country safe – and I agree with my colleagues that it is only right we protect them from vexatious claims and repeated investigations. This Bill will prevent the legal pursuit of our troops where there is no new evidence, by introducing a new five-year limit on the time in which troops can be subject to civil legal claims, helping to stop unfounded investigations.

It is absolutely right service personnel are held to the highest standards of behaviour and conduct. This Bill ensures credible allegations are fully investigated and only pursued where necessary, but also our Armed Forces will be protected from the vexatious claims and repeated investigations that so many have suffered in recent years.

We will also be introducing important separate legislation to address the legacy of the past in Northern Ireland as quickly as possible - and in a way which focuses on reconciliation, delivers for victims, and ends the cycle of reinvestigations into the Troubles in Northern Ireland delivering on our commitments to Northern Ireland veterans.

The UK has a world leading role in the promotion and protection of human rights, and unreserved condemnation of the use of torture remains firmly in place. This Government remains committed to our obligations under international humanitarian and human rights law, including the UN Convention Against Torture. Nothing in this Bill changes this position.

This Bill is the first part of a series of measures to improve our country’s ability to withstand lawfare – a medium through which modern conflicts are becoming increasingly fought. This includes a review of how we conduct investigations - and crucially the time it takes to do so to ensure the highest levels of confidence in our operations. Similarly, there is a significant programme of information and education running alongside the progress of the Bill, to ensure our Service men and women are fully aware of their rights and responsibilities if they – rightly – sue the MoD when things go wrong.

But the days of exposing our Service personnel to a totally unregulated environment which has spawned a multi-million pound fraudulent industry of legal claims and repeated criminal investigations with no new evidence, all the while ruining the lives of the people who defend our country, are coming to an end under this Government.

I wanted to end by including a quote from my colleague, the Minister for Defence People and Veterans, Leo Docherty MP and former serving soldier said the following during last Wednesday’s debate on the Lord’s proposed amendments to the Bill:

“The Ministry of Defence takes very seriously its duty of care for service personnel and veterans, for whom there already exists a comprehensive range of legal, pastoral, welfare and mental health support, details of which can be found, as I have mentioned, in the Secretary of State’s written ministerial statement of 13 April.

To read more about the proposed amendments, and the Government’s stance on these, the full debate can be read here Overseas Operations (Service Personnel and Veterans) Bill - Wednesday 21 April 2021 - Hansard - UK Parliament

By disrupting the cycle of reinvestigations and claims which often plague our veterans, I believe we can repay the extraordinary commitment and courage shown by the men and women who defend our nation, as part of our continued commitment to make the UK the best place in the world to be a veteran.