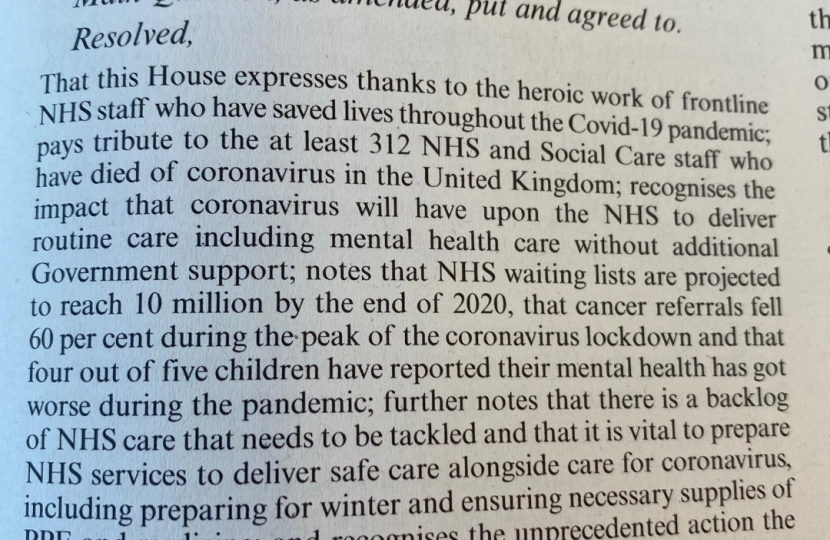 Following the opposition motion and vote last night, there is now a wider social media campaign suggesting Conservative MPs are uncaring as they directly voted against both pay rises for health and care staff and are against regular testing for NHS staff in an opposition day debate and via their motion.

I, like many many others am hugely grateful for all our NHS staff do daily. Their commitment, dedication, abilities and daily energy in hugely challenging situations The NHS staff, care workers and other medical professionals who are on the frontline in the fight against coronavirus. Over recent months, we have significantly increased our testing capacity in this country – we are now able to carry out more than 200,000 tests a day – which means that we can ensure all NHS and care staff are prioritised for regular testing.

The approach on the testing of NHS staff has been fully determined by clinical experts, including the Chief Medical Officer, and the NHS on now set out plans for how it will work in all scenarios. This includes continuing to prioritise testing of all NHS staff with symptoms, regular testing of asymptomatic staff in situations where there is an incident or outbreak, and regular surveillance testing of staff. The Government is continually reviewing the clinical evidence to ensure regular testing of staff without symptoms is undertaken where appropriate. To be very clear, I am not against regular testing of NHS staff far from it!  The Labour front bench spokesman said ’if necessary’ which is the current situation . Their motion then dropped those words meaning testing without any direct targeting. I was to my mind a political stunt to create upset and reactions. What was agreed is here. So the “if necessary” was not in the wording of their motion, which instead called for blanket weekly testing without any qualification – proving this was nothing more than a political stunt by a Labour party that could not even agree among themselves what they were asking for. Regular testing, including weekly testing if it is deemed necessary, is essentially what the current government policy is and I will continue to support this clinically-informed approach

As I’m sure you can understand, we are taking a clearly  targeted and informed approach to this testing, so that it is focused on the most high-risk areas. Clinical advice is to focus intensive asymptomatic testing in those areas or settings identified to have high prevalence. Staff working with patients on wards, for example, will benefit from regular testing far more than NHS staff working in offices or administrative roles where they do not come into regular contact with patients. This approach is crucial as, when prevalence of the virus is very low, the risk of misleading results is higher, which can undermine the value of testing.

Furthermore, a separate campaign has alleged Conservative MPs votes against lifting the public sector pay cap in another opposition day vote. This vote would not, by itself, have lifted the public sector pay cap. Despite voting against the amendment, the government announced the end of the pay cap later that year, and nurses received a pay rise in cash terms above inflation of 1% in the following financial year and this is an approach I fully support.  Opposition days are exactly this chance for the opposition to raise matters and challenge the Government. That is their role. Our role is to make it clear what we are doing and are committed to in response. I recognise this may seem confusing however Parliamentary procedure is difficult to decipher and often social media offers far from a good understanding at times like this.