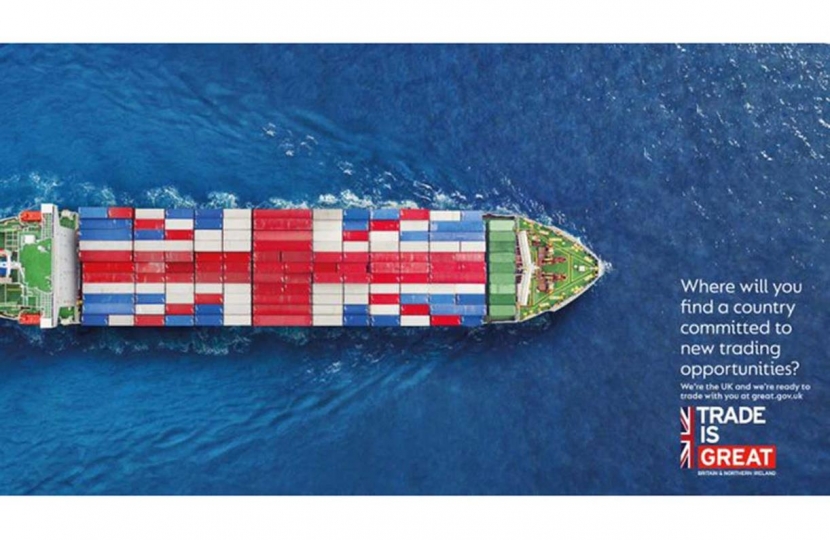 The Act, which bestows powers necessary to bring new trade deals into being and put the agreements it strikes as a newly independent 21st-century trading nation on to the statute books, meaning the 67 trade deals worth £218 billion we have already signed can become part of UK law.

This is absolutely crucial, and will come as a huge boost to businesses across Mid Sussex, as we put British householders’ and businesses’ interests first in future agreements, providing certainty for British firms to trade successfully overseas and the ability to access new, fast-growing markets - creating jobs, encouraging investment and aiding the economic recovery from Covid-19.

This follows last week's announcement by my colleague Liz Truss MP, the Trade Secretary, that we have reached a major breakthrough in our negotiations with our close international friend and ally Australia, taking us one step closer towards a fantastic, new UK-Australia trade deal.

I know this will come as more welcome news to constituents, as every trade agreement is another important step in developing an independent trade policy for the first time in over 40 years, following our withdrawal from the European Union. This includes strengthening our already considerable trade and investment ties with like-minded countries such as Australia, New Zealand and Canada.

As we look to continue to rebuild our economy and forge new partnerships around the world – a trade deal with Australia offers brilliant opportunities for UK companies to benefit from access to new markets. The UK shares a Head of State, a language, a common law system and a common set of values with Australia, as well as strong people-to-people links. Like the UK, Australia is a member of the ‘Five Eyes’ intelligence alliance and the Five Power Defence Arrangement. Department for International Trade (DIT) Research also indicates strong public support for free trade agreements with Australia.

This deal will deliver for every corner of the UK and our economy and is a win-win for both our nations. The securing of this deal will support jobs across the country and help us emerge stronger from the pandemic with a strengthened partnership with our Australian allies. Businesses across the UK and Mid Sussex, from drinks companies, automotive industries, professional services firms, and much more, are expected to benefit from the removal of barriers to trade with Australia.

This also links into the UK’s application to join the Comprehensive and Progressive Agreement for Trans-Pacific Partnership (CPTPP). Canada, New Zealand and Australia are CPTPP signatories. It is encouraging that all CPTPP members have welcomed the UK’s interest in accession. You can read more about my thoughts on the CPTPP here: UK officially applies to join the CPTPP | Mims Davies

I hope it will bring confidence to you all to know that, with the Trade Act becoming law, we will continue to seize the new opportunities our exit from the EU has brought - delivering lower tariffs on great British products and new access to exciting markets across the globe.