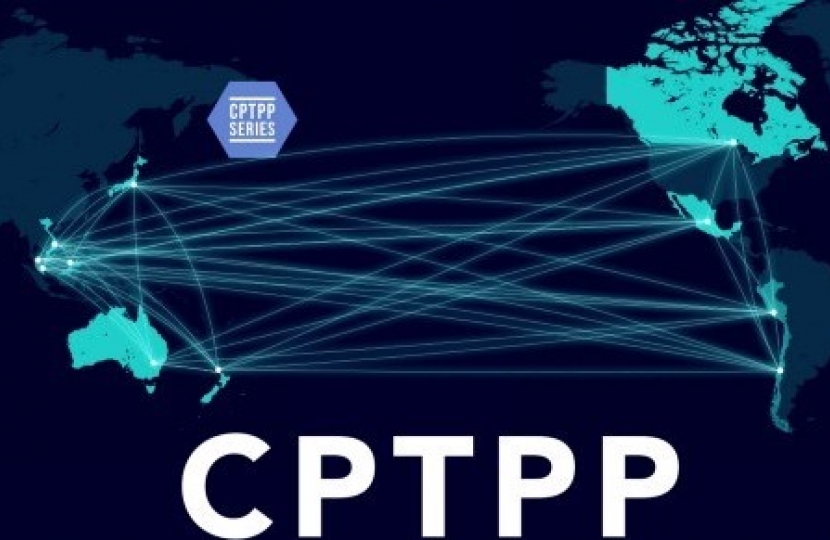 I am delighted to share with constituents confirmation the UK is applying to join The Comprehensive and Progressive Agreement for Trans-Pacific Partnership - or CPTPP – a free trade area which contains 11 Asia and Pacific nations and states. This is one of the largest free-trade areas in the world, made up of 500 million people and some of world’s fastest-growing markets.

Negotiations are set to begin this year, and my colleague, the International Trade Secretary, Liz Truss MP, spoke to ministers in Japan and New Zealand yesterday (Monday 1st February) to formally request to join the CPTPP.

For a bit of background, the CPTPP is made up of Australia, Brunei, Canada, Chile, Japan, Malaysia, Mexico, New Zealand, Peru, Singapore and Vietnam. It is the third largest free trade area in the world by GDP and the UK’s trade with this group was worth £111 billion in 2019, growing by 8% a year since 2016. I really believe this news is another example of the benefits leaving the EU has brought for the UK.

If we joined the CPTPP, it would cut tariffs for UK industries and businesses, including those in Mid Sussex, as well as creating new opportunities for companies to expand into new markets, creating high-value jobs across the UK. Crucially, unlike being a member of the EU, joining this trade area would not require the UK to sacrifice control over our own laws, borders or money – a key reason why the British people wanted to leave the EU.

Some further benefits of CPTPP membership are as follows:

The International Secretary had the following to say after this announcement:

“Joining CPTPP will create enormous opportunities for UK businesses that simply weren’t there as part of the EU and deepen our ties with some of the fastest-growing markets in the world.

“It will mean lower tariffs for car manufacturers and whisky producers, and better access for our brilliant services providers, delivering quality jobs and greater prosperity for people here at home.

“We’re at the front of the queue and look forward to starting formal negotiations in the coming months.”

“One year after our departure from the EU we are forging new partnerships that will bring enormous economic benefits for the people of Britain.

“Applying to be the first new country to join the CPTPP demonstrates our ambition to do business on the best terms with our friends and partners all over the world and be an enthusiastic champion of global free trade.”

I would encourage constituents to continue to follow my website for further updates on this exciting news, as well as other developments, including the continuing, local vaccine roll-out, which can be found here: https://www.mimsdavies.org.uk/news/vaccine-roll-out-mid-sussex-latest-details