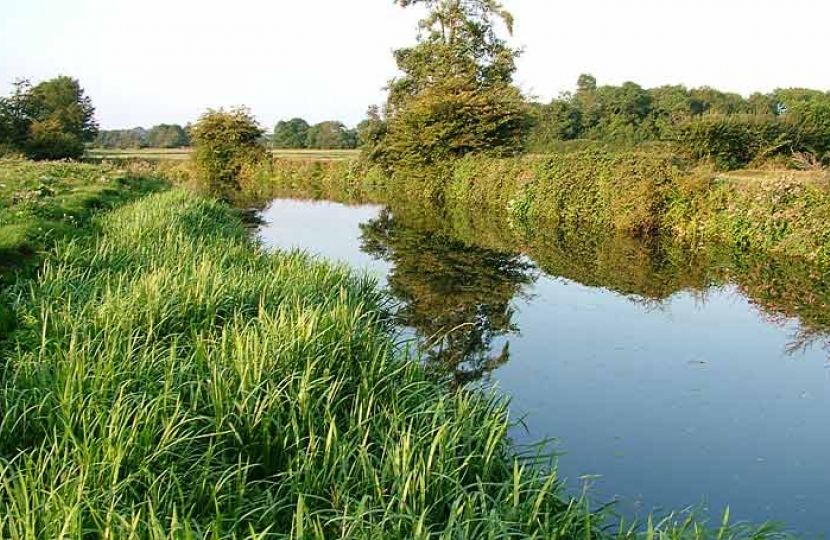 As Cop 26  draws ever closer, our landmark new Environment  Bill will place environmental ambition and accountability at the heart of Government ensuring we can deliver on the commitment to leave the natural world in a better condition than we found it.

MPs have been voting on proposed amendments by the Lords causing concerns across social media in particular . Yet we are determinedly changing the law to reduce sewerage entering our rivers and seas from storm overflows. The new Bill puts an important range of direct new legal responsibilities on water companies to tackle water pollution.

Its very important we support detailed , practical work to deliver this. So to be clear,  there is a new duty on water companies to share public data, real time information too and the  need to continuously monitor water quality both up stream and downstream of any urgent disposal. Plus significant strategic demands via OFWAT alongside a new Storm Overflows Taskforce which is already underway.

Votes always have consequences, I understand. Complexity of the debate is rarely clear via social media and I will always try to explain to constituents why some appealing ideas aren’t taken forward and hearing the debate and Minister is key to help understand the Parliamentary decisions process and the what is actually being delivered or possible to do.

Latest Update From Government as of Tuesdsay 26th October:

﻿We will be bringing  forward an amendment at the next Commons stage of the Environment Bill which will place a direct legal duty on water companies to progressively reduce the adverse impact of discharges from storm overflows. This amendment follows the position we have already set out in our draft Strategic Policy Statement to Ofwat that we expect water companies to take steps to “significantly reduce the frequency and volume of storm overflows”. This means that when Ofwat and Environment Agency set out the process for the next Price Review [in 2024], they will include this in their requirements for companies preparing their business plans.

Please NOTE : This new amendment will make the government’s position unequivocal in law.

I am clear the existing provisions will achieve progressive reductions in the harm caused by storm overflows, underpinned by the new direction to Ofwat in the Government’s draft Strategic Policy Statement that expects them to incentivise water companies to significantly reduce the frequency and volume of sewage discharges from storm overflows.

The Bill now requires the Government to produce a statutory plan to reduce discharges, and report to Parliament on progress. It requires the Environment Agency to publish annual information on discharges, and water companies to provide near real time overflow data and continuous water quality monitoring, as well as to produce comprehensive statutory plans for the resilience of their wastewater networks. The Government will also be required to publish a report before 1 September 2022 explaining the actions needed to eliminate storm overflows.

To eliminate storm overflows means transforming the entire Victorian sewage system to a whole new sewage system. It would be irresponsible for any government to spend an estimated preliminary cost of anywhere between £150bn to £650bn to transform the entire sewage system. This is a huge amount to spend in an ordinary time, let alone at a time of a continuing health pandemic.

To give some perspective, £150bn is more than the entire schools, policing and defence budget put together and £650bn is billions more than we have spent on supporting livelihoods and jobs throughout the health pandemic.

The Government could not accept this amendment because it would have huge implications – including potentially digging up people’s homes and businesses – but would be open to further compromise.

​​These amendments tackle storm overflows through a new requirement for water companies to monitor the water quality impacts of their sewage discharges and publish this information, with the Secretary of State being able to make regulations regarding the publication of this information. Ministers say that this monitoring will drive action by water companies to reduce sewage discharges that do the most harm, to better protect the environment and public health. Water companies will also be required to publish near real-time information on when their storm overflows operate.

Further, the amendments will introduce a duty requiring the Government to produce a plan for the reduction of both storm overflows and their harm as well as a duty to publish a report considering the costs and benefits of eliminating overflows entirely which will inform decision-making in this area. Both of these actions are required before 1 September next year. Separately, ministers will undertake a review of legislation which would require Sustainable Drainage Systems to be constructed to ministerial standards on new developments, reducing the pressure on the sewage system.

I would also encourage you to read DEFRA's full explainer of this Bill, including on why Amendment 45 could not be accepted. This can be found in the attached pdf below.