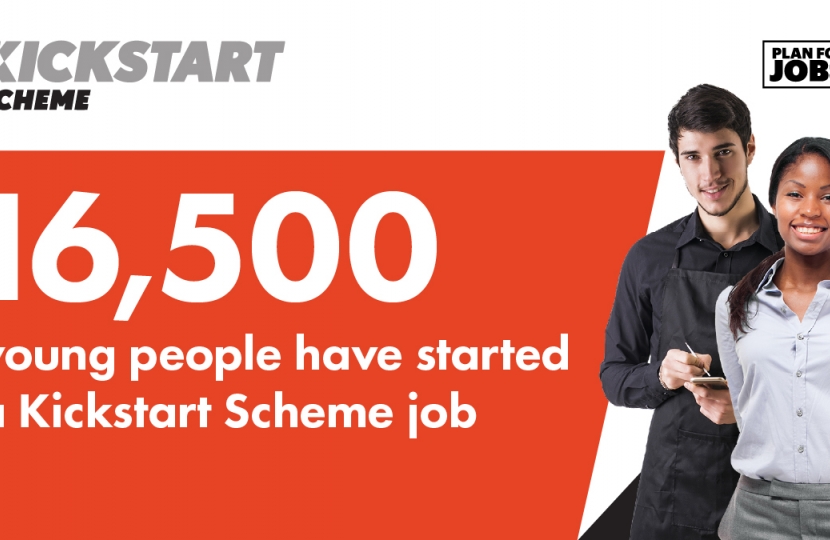 I often update constituents on my ministerial work at DWP as the Employment Minister, and I could not be prouder of the Kick Start Scheme. The response to the scheme has been overwhelming from both employers and young people.

As of the last week of April, more than 260 young people have started a Kickstart job every day for the last six weeks – bringing the total to more than 16,500 across the country.

With the success of the vaccination programme and the following roadmap, we expect these figures to rapidly increase as sectors such as hospitality will be able to take on more Kickstarters.

To mark the milestone, Secretary of State for Work and Pensions, Therese Coffey MP, visited an M&S store in London, meeting some of the young people who have recently joined the company through the flagship Kickstart youth employment scheme, which is creating thousands of new jobs for young people as part of the Government’s Plan for Jobs.

M&S plans to take on a total of 360 young people via the scheme, with a second Kickstart cohort scheduled to start in June. Joining as Trainee Customer Assistants in stores across the UK, the new recruits will rotate across food halls, back of house operations, hospitality and clothing and home departments at M&S stores.

More than 195,000 Kickstart jobs have been approved through the Scheme nationwide. These will provide new, subsidised jobs for young people aged 16-24 and at risk of long-term unemployment in the coming months – helping them get a vital first foot on the jobs ladder, and gain skills for the future.

Secretary of State of Work and Pensions, Therese Coffey, said:

“The Kickstart scheme is playing a vital role helping our next generation of workers get onto the jobs ladder – hundreds of young people are starting their Kickstart jobs every day and more vacancies are becoming available all the time.

“Employers like M&S are giving young people an opportunity to succeed, and I encourage more businesses to join Kickstart and be part of our national effort to build back better.”

“We have a long history of supporting and developing young people so it made sense for us to get involved in Kickstart. In partnership with The Prince’s Trust we have developed a programme for up to 360 placements that will help those involved experience all parts of our M&S stores and gain broad retail skills.”

“My Job Centre coach recommended that I apply to the Kickstart scheme. I could see there were lots of benefits so I decided to go for it. I am looking forward to selling quality products and providing good service, as well as working in a positive environment.”

The Kickstart scheme forms part of the Government’s multi-billion-pound Plan for Jobs aimed at protecting, supporting and creating jobs.

To help spearhead efforts to get Brits back into work the DWP has hired 13,500 new dedicated Work Coaches, and later this year the new Restart scheme will launch to help over a million people who have been out of work for more than a year.

To find out more about the Kickstart scheme click here.

I recently updated the House of Commons, as the DWP Minister for Employment, on how we are continuing to engage with employers of all sizes to create new high-quality placements for our young people to get their start on the employment ladder, through the Government’s Kickstart Scheme. In doing this, we wanted to make the scheme even simpler. So, from February 3rd, we removed the 30 jobs minimum for job applications, giving new applicants a choice to apply directly or via one of over 600 excellent, approved Kickstart gateways. These can be found here: https://secure.dwp.gov.uk/find-a-kickstart-gateway

Under this scheme, the Government will pay 100% of the young person’s age-relevant National Minimum Wage for 6 months, National Insurance and pension contributions for 25 hours a week, which the employer can top up if they choose to. In addition, the Government will pay £1,500 per Kickstarter taken on to cover any associated set up costs. Since it first launched in September, the Government has been working with companies across a wide range of sectors to create over 120,000 Kickstart jobs; and in encouraging more employers to join, we are now making it even easier for companies of all sizes to apply for any number of vacancies.

Employers who are looking for support in delivering employability support for young people can apply through one of our approved gateways, which can also offer valuable connections into local communities.

We have over 700 approved gateways able to support employers who choose to  access the scheme through this route.

Employers will not be charged to use a Kickstart gateway but they may use part of the  £1,500 grant to secure the appropriate level of employability support either from the gateway or another provider, particularly the element focused on employment skills and work search preparation. Many gateways are making great offers of support to young people and employers.

I recently spoke with Danielle, one of our DWP Work Coaches at Swansea Jobcentre, about her role and how the team have adapted during the pandemic. She was telling me about the role of the youth team there and how engaging young applicants to the scheme had been. You can see our full conversation on my twitter feed: @mimsdavies

I am continuing to engage with work coaches across the country, as well as with the rest of my team in DWP, in order to encourage even more businesses and young people to get involved in the scheme, and more information can be found here: https://www.gov.uk/guidance/apply-for-a-kickstart-scheme-grant