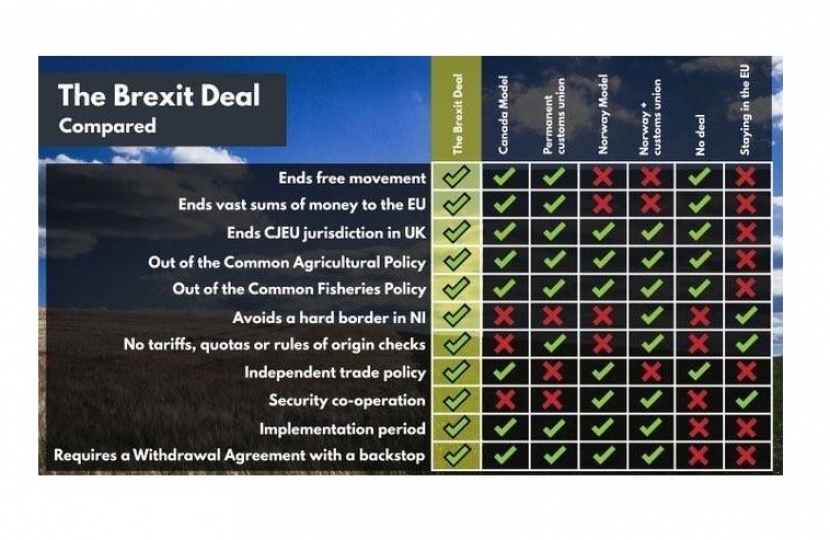 As with any democratic exercise, each of us would have used our vote in 2016 for different reasons and with differing priorities, nevertheless, the outcome of the referendum saw 39,902 of us in the Eastleigh area, together with 17.4 million people across the UK, a majority in both instances, vote to leave the European Union.

Following that vote, the Government sought to negotiate a deal with the European Union which respected the views of those who, like myself, voted to leave the European Union, while also ensuring we continue to have a close working and trading relationship with our closest neighbours, friends and allies, and bring people from all sides of the EU debate back together.

Further to that extensive work, in January the Prime Minister brought the Withdrawal Agreement - that would have seen us leave the European Union on time on the 29th March 2019 – before Parliament. All recognised that this ‘deal’ wasn’t perfect, however, it would have taken back control of our laws, our borders and our money – three of the key reasons behind many people voting to leave the EU in June 2016. Moreover, it safeguarded the rights of EU citizens in the UK and UK citizens living in the EU, as well as supporting businesses and jobs. Regrettably, while as Eastleigh’s MP I voted FOR the Withdrawal Agreement, a large majority voted against it, many citing concerns over the so called ‘backstop’.

As a result, the Prime Minister reached out across Parliament, while also returning to Brussels to negotiate changes in respect of the so called ‘backstop’. Having gained legal changes to the backstop, on Tuesday this week, the Prime Minister brought the Withdrawal Agreement back before Parliament. Again, I voted for the improved Agreement in the hope that we could do something that the majority of the people I hear from, people I speak to, as well as businesses want – to move forward! Nevertheless, the Withdrawal Agreement again failed to pass through Parliament, albeit by a significantly reduced margin.

Following this, indicative votes were held on Wednesday and Thursday of this week first in relation to taking No Deal off of the table, and secondly on extending Article 50.

In June 2016, like the majority of my constituents, I voted to leave the EU, and have since been committed to doing so in a smooth and orderly way. Having ‘No Deal’ on the table is key to our ability to negotiate with the European Union, and remains the default position, ensuring that our Parliament, the mother of all Parliaments, respects the result of the EU Referendum. That is why, on Wednesday evening, I voted to leave No Deal on the table. I greatly regret that, while No Deal absolutely remains the default position, thanks to votes by opposition MPs, Labour, Lib Dem and others, all determined to reverse the Referendum result altogether and keep us in the EU, a majority of MPs voted to take No Deal off of the table.

Then yesterday, I voted AGAINST a Second Referendum. This would take us back to square one, and remains, in my opinion, a disingenuous attempt by some – including the Liberal Democrats and many in the Labour Party – to stop the UK ever leaving the European Union. Therefore I was pleased that this option was defeated in Parliament yesterday, with only 85 MPs supporting it.

I then, as previously promised, went on to vote AGAINST extending Article 50 – e.g. delaying Brexit. I remain of the strong opinion that the House of Commons MUST focus, deliver on the result of the EU Referendum and do so as soon as possible. Nevertheless, Parliament as a whole voted to extend Article 50.

Therefore, with both No Deal taken off of the table and Article 50 extended – although these were ‘indicative’, as oppose to ‘meaningful’ votes – the reality of a Parliament where a majority of MPs want to either water down Brexit via a Customs Union and Single Market, or scrap Brexit altogether, betraying every single person that voted for the UK to leave the EU, is clear. Therefore, I will be backing the Withdrawal Agreement next week. This Withdrawal Agreement would:

and vitally, is the only way of ensuring that we LEAVE the EU, and I will be working to ensure that we leave as close to the 29th March as possible!

Finally, I would like to thank everyone who has emailed or written in over the last week, many of you with kind and understanding comments. These are not easy times, or moments for flippant decisions, and I can assure you that my responsibility as your MP weighs heavily on me, and I understand that greatly.

As ever, I will keep you updated.