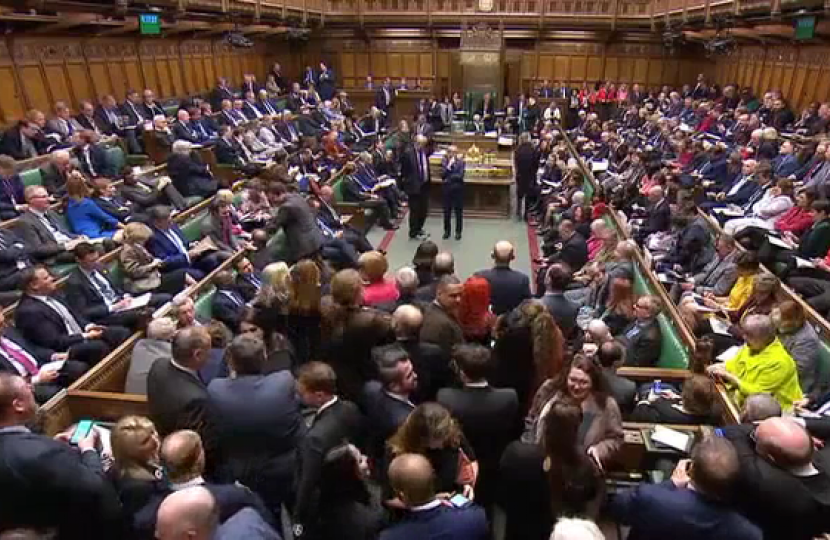 Last night MPs were presented with eight different options – some of which had previously been voted on and discounted - on how to move forward with Brexit. As ever, I wanted to update you on how I voted, and my reasoning for doing so.

In 2016, the majority of people in our area, on a turnout close to 80% - the highest turnout in over two decades – voted to leave the EU. Since that time, I, alongside the pm, have always looked to take a pragmatic approach to delivering on that result, and to find a route that can bring all sides of the Brexit debate back together.

I have therefore twice supported the Withdrawal Agreement that has been negotiated between the UK and the EU compromising of 27 other countries, which would have delivered on the result of the referendum ON TIME while ensuring a continuing relationship during the implementation period while we negotiated out new future trading partnership with our friends and neighbours across Europe. Should the Agreement be brought back before the House, I shall do so again.

Last night, however, that was not one of the options on the ballot. I would have liked to have voted for cross-party Motion E which called on ALL MPs to simply respect the referendum result, however, this was not selected by the Speaker – therefore I voted in the only way I believed would deliver a timely Brexit to move the country forward.

That included voting to leave the EU on the 12th April without a deal if the Withdrawal Agreement can’t be passed. In Government I’ve seen first-hand the planning that has gone in to No Deal preparations, and while I would always prefer the UK to leave the EU with a Deal – and leaving No Deal on the table will, in my opinion, make that more likely – I feel that we would be prepared to leave on managed No Deal terms on the 12th April. This is in line with what I have told my voters I will do as their MP, and ensures that we deliver on what the majority voted for in the 2016 Referendum, as well as in the 2017 General Election when more than 80% of those that voted, chose to vote for a Party committed to delivering Brexit.

Last night, again in line with what I have said previously, I voted against revoking Article 50 (not leaving the EU!), against a ‘Confirmatory Public Vote’ (which aims to reverse the result of the EU referendum and would only to my mind continue more division and uncertainty), and against leaving the EU with a Customs Union – which would not allow us to strike free trade agreements with the rest of the World.

However, the most important point to make is that even with Labour MPs whipped strongly for softer Brexit/no Brexit options, and Conservative MPs allowed a free vote and some abstaining, NONE of the 8 options received a majority of support from the House of Commons last night. As a result, we are NO further forward, and have no more idea of what MPs would support. This simply cannot continue. The people and local businesses that I speak to in our area are calling out for MPs to agree a way forward that delivers on the result of the referendum and brings an end to uncertainty, and as Eastleigh’s MP, I will continue take a pragmatic approach to achieving that aim.

My thanks again to all of those that have been in touch with such kind words of support in recent weeks. I will always listen widely over this and all matters, and while I will not always be able to make everyone happy, I do take ALL suggestions and views incredibly seriously, and I take my responsibilities as your MP as well as a Government Minister similarly so.

Thanks once again to all of those who have taken the time to get in touch.