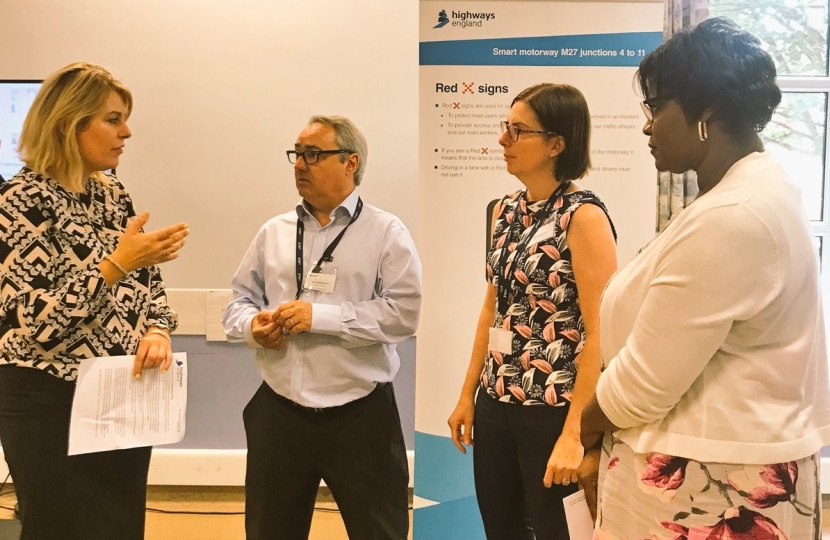 Today the Member of Parliament for Eastleigh, Mims Davies, dropped in to one of Highways England’s information events to discuss plans for the introduction of a Smart Motorway scheme from Junction 4 to Junction 11 of the M27.

The upgrade is expected to reduce congestion and improve journey time reliability by making the hard shoulder available as a traffic lane, and use variable speed limits to smooth traffic flow.

Earlier this week the Eastleigh MP caught up with Highways England representative, John Henderson, to talk about the proposed upgrade works to the M27, while also discussing other key areas of the local road network such as Junctions 7 and 8 of the M27, roads leading off of this major road such as Hamble Lane and residents’ concerns over air quality.

Commenting at the event, Mims said:

“Dozens of residents have written to me to say that while they warmly welcome this key local project and its benefits, a key issue for them is noise created by the concrete section of the M27.

“During my meetings with Highways England, I know that it has always been their intention to overcome this particular issue as they plan upgrade works for the M27, and I was pleased to hear earlier this week, and again today at the 2000 Centre in Hedge End that their investigatory work is making progress, with a decision expected later in the year.

“It was also great to get a quick update on plans to improve Junction 7 of the M27, including replacing the traffic signals meaning that people won’t be waiting needlessly for lights to change!

“My thanks again to John and the Highways England team for putting on these really important community information events, as well as to the hundreds of my constituents who have taken the time to attend them.”

"This is one of our largest schemes in the region for several years. We look forward to meeting businesses and residents at one of our events to explain how this will deliver real journey time benefits to users of the M27."

A number of information events are still due to take place, as laid out below: