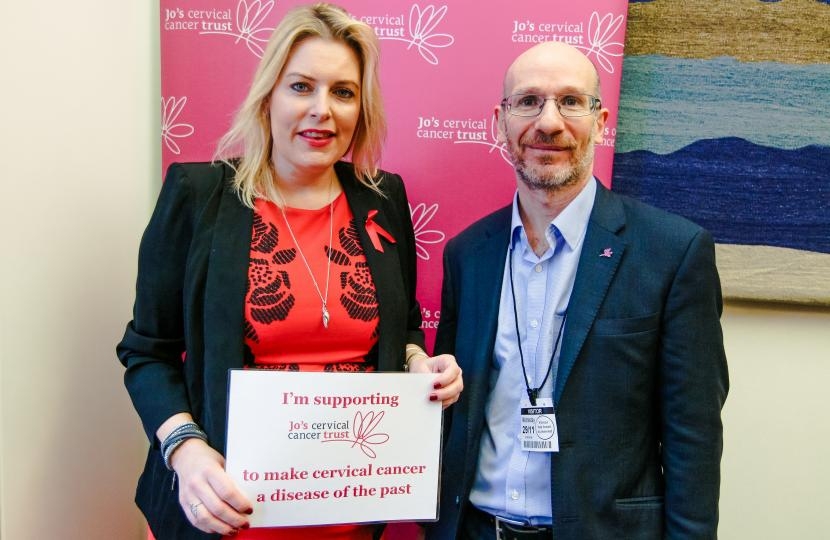 The Member of Parliament for Eastleigh, Mims Davies, has joined Jo’s Cervical Cancer Trust to mark the launch of their #SmearForSmear campaign by saying that the only way to be clear on cervical cancer is to have a smear test.

It follows a report in which Jo’s Cervical Cancer Trust surveyed more than 2,000 women aged 25 to 35, with findings showing that eight out of ten (81 per cent) of those women admitted to feeling embarrassed, while six in ten (58 per cent) said that they were scared that it would hurt.

Commenting the MP for Eastleigh said:

“I know only too well myself how easy it can be to put work and everyday responsibilities above having a smear test, but having had close friends pick up issues thanks to having a smear test, and with 220,000 British women being diagnosed with cervical abnormalities every year, it is really vital that we don’t ignore our smear test appointments and get them booked in.

“In short, the only way to be clear on cervical cancer is to have a smear test.

“I would also like to acknowledge the huge amount of work that Jo’s Cervical Cancer Trust does as a charity to campaign on this issue, as well as the incredible effort that our local doctors and nurses put in to making sure we are comfortable when having screenings.”

“Public Health England will be launching a national campaign shortly to highlight the risks of cervical cancer and encourage women to attend their smear appointments.

“I as a Prime Minister can stand here and say this, I know what it is like to go through a cervical smear test, it is not comfortable, sometimes for some it will be embarrassing, sometimes it’s painful, but those few minutes can save lives, so I would encourage all women to take up their smear tests.”