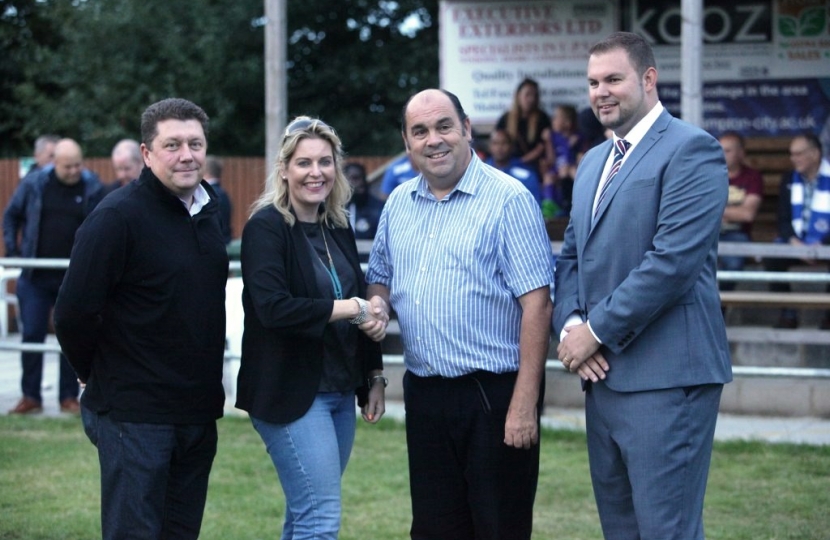 Mims Davies, MP for Eastleigh, switched on AFC Stoneham’s brand new floodlights for the first time recently (Tuesday 1 August) during a friendly match for the club against Eastleigh FC. The new lighting was installed thanks to a grant from the Premier League, through the Football Stadia Improvement Fund (FSIF), the largest funders of non-league football in the country.

The club, which plays in the Sydenhams Football League (Wessex) Division 1, were awarded £28,323 of Premier League funding towards the new floodlighting system after successfully applying to the FSIF. The club was promoted for the 2015/16 season and the FSIF grant has helped them to meet the FA National Ground Grading Criteria for the Step 6 level in the FA National League system – ahead of competing in The FA Cup for the first time in the club’s 100-year history!

AFC Stoneham hopes the new upgrade to the stadium will enable them to deliver top quality training and fixtures throughout the year. Stoneham currently has over 30 teams which cater for players as young as four up to adult, including a ladies side.

Funded with £6.5m each year from the Premier League, the FSIF – the sister organisation of the Football Foundation – is the country’s largest provider of grants towards projects that help improve the comfort and safety of lower league football grounds in both the professional and amateur game. These improvements range from new football stands and turnstiles to floodlighting and improved provision for disabled supporters.

“This is a much-needed upgrade for the club and I’d like to thank them for inviting me to switch on the floodlights for the first time. It is vital for clubs at the lower levels to have the best infrastructure in place, to cater to their players and fans.

“It is important that we give football clubs the best facilities possible, because they can benefit so many people. This particular project is an excellent example of the work by the Premier League, which is delivered by the Football Stadia Improvement Fund.

“There is a strong community spirit at the club which is catering for a huge number of youngsters from across the area, which couldn’t happen without the amazing volunteers who are committed to supporting grassroots football.”

“The FSIF and their staff, including Chris Davies, were a big help not only in obtaining the funding but also with advice and help on the whole process. Their support was invaluable.”

“I am glad that money invested by the Premier League, through the FSIF, has helped AFC Stoneham to install their brand new floodlights. I would like to thank Mims Davies MP for doing the honours and switching the new lights on for the very first time.

“The Premier League, through the FSIF, is committed to improving infrastructure at lower levels of the game, with the goal of making training and fixtures safer and more flexible. Well done to the club for their hard work in making the project a success.”