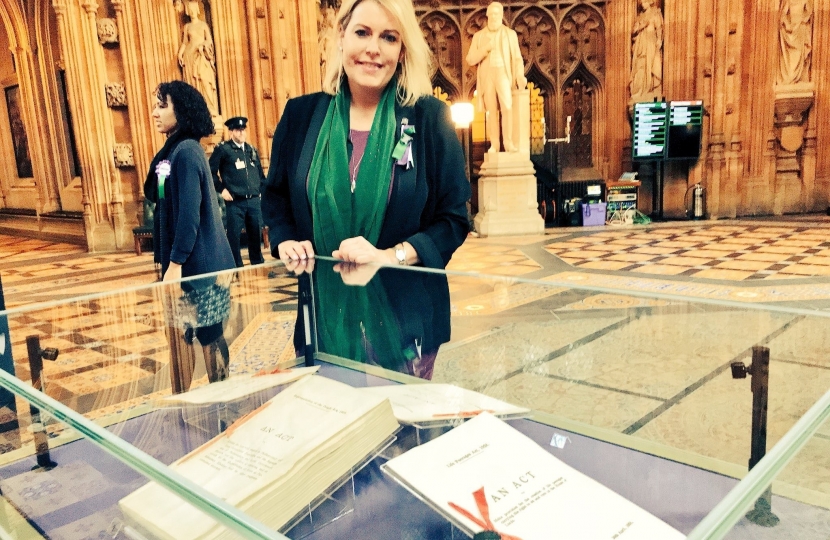 Eastleigh MP Mims Davies – this week appointed Parliamentary Under Secretary of State for Sport and Civil Society - is only the 380th woman to be elected to the House of Commons, and the first woman to represent Eastleigh as its Member of Parliament. It is therefore no surprise that she has a passion for female representation in politics, previously serving on the Women and Equalities Select Committee and as Chair of the All Party Parliamentary Group on Women in Parliament.

This year marks 100 years since the first women won the right to vote in UK elections, and in that vein, local MP Mims Davies has been visiting local schools across the Eastleigh constituency to talk about her story, the suffrage movement and women’s equality. Last Friday, that programme was kicked off with a discussion with students and staff at The Hamble School.

“It was brilliant to kick of my suffrage talks at the Hamble School last week in support of Vote100. As ever there were some great questions and it was really lovely to chat to students and staff, and listen to their views and hear their ideas, and I’m really looking forward to returning for their Presentation Evening later today.

“Unsurprisingly, neither students nor staff could believe that Eastleigh had only been represented in Parliament by one female MP since its creation, and that there have only ever been 489 women elected to Parliament since women first won the right to vote and stand in UK elections one hundred years ago in 1918!

“I think it is really important that we encourage more women to stand for public office, and that includes inspiring the next generation. This week I met with students from Crescent Primary School after arranging for them to have a tour of Parliament, and I’m really looking forward to visiting them again later this month as I continue my suffrage talks.”

Vote100 marks 100 years since Parliament passed a law which allowed the first women, and all men, to vote for the first time, and has led to major exhibitions, talks, tours and events around the UK.

The next stop of the Eastleigh MPs Suffrage Talk will be Norwood Primary School in Eastleigh later this month.